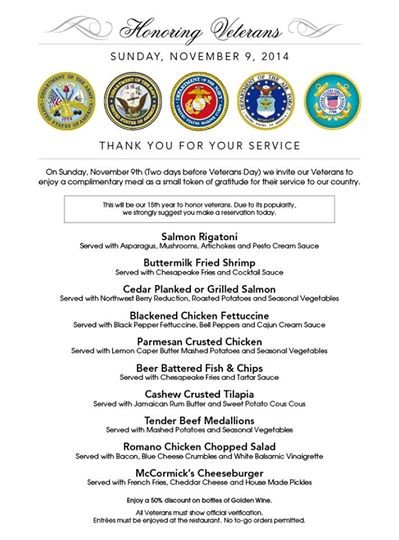 "We are proud to honor the brave service men and women who commit their lives to defend our country's freedom," said Tilman Fertitta, sole owner, chairman and CEO of Landry's, Inc.

"This is McCormick & Schmick's 15th year to treat our nation's heroes with a well-deserved meal and look forward to continuing this tradition for many more years to come," Fertita added.

McCormick & Schmick's Seafood Restaurant has long been commemorating Veterans Day and gratefully thanked every veteran that set foot on their stores since 1999.

The special offering will be available for those who have served the Air Force, Army, Navy, Marines or Coast Guard, and the restaurant will also need to authenticate the information.

The company also operates a gaming division including the Golden Nugget Hotel and Casino Concept in Las Vegas and New Jersey.