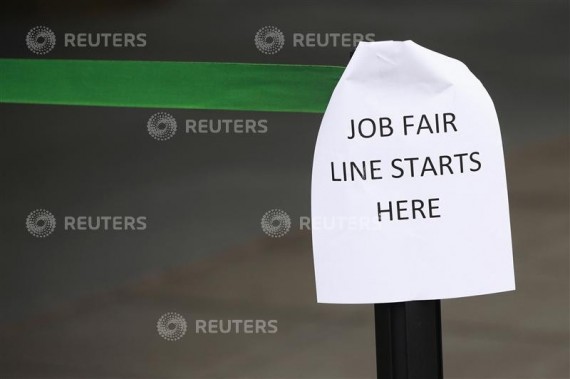 A sign marks the entrance to a job fair in New York(Photo : Reuters)

In a rare display of election-year bipartisanship, the House of Representatives voted overwhelmingly on Thursday to make it easier for small businesses, the engine of the economy, to raise capital and eventually hire workers.

With unemployment hovering above 8 percent, both Democrats and Republicans are eager to show voters they are trying to create jobs ahead of the November 6 elections. But the passage of the bill stood in stark contrast to the partisan gridlock that has stymied much bigger job creation measures in recent months.

And it is unclear just how many jobs the Republican measure, the Jumpstart Our Business Startups (JOBS) Act, will actually create. House Democratic leader Nancy Pelosi was dismissive of its economic impact.

"While this little package is, I think, viewed positively, it is not any substitute for the jobs bill that we need," she said.

The House bill, which passed 390 to 23, would relax certain Securities and Exchange Commission requirements to make it easier for small firms and startups to raise capital and boost hiring. One measure would make it easier for firms to solicit private investors, while another would relax filing requirements associated with initial public offerings.

The JOBS Act gives House Republicans much-needed ammunition, to counter President Barack Obama's re-election strategy of running against a "do-nothing" Congress that paints the party as obstructionist and unwilling to work with him to tackle the country's high unemployment rate.

Eric Cantor, the No. 2 Republican in the House who championed the bill, acknowledged that it was aimed at boosting Congress's poor approval ratings, which are at near record lows.

"What we're trying to do is to regain the confidence of the people that sent us here," Cantor told reporters. "By having a win like this I think we can demonstrate that we really can work together."

Passage of the bill came a day before the U.S. government was due to release its jobless figures for February. The 8.3 percent unemployment rate is not expected to change.

The bill repackaged some measures approved by the Republican-controlled House last year. It now goes to the Senate, where Democrats are expected to unveil a similar package as early as next week.

Senate Banking Committee chairman Tim Johnson said in a statement that the Senate version will include some job creation proposals which are part of President Obama's Startup America initiative.

The U.S. government says small businesses - those with 500 or fewer employees - employ about half of all private sector workers. Many small firms complain that they are hampered by red tape.

The Congressional Budget Office estimates the bill's net annual cost to be about $50 million, which the SEC could offset with fees it is authorized to collect from the firms it regulates.

Both exchange operator NYSE Euronext and the Chamber of Commerce, the nation's largest business lobbying group, praised the bill and leaned on the Senate to approve it.

"We urge the Senate to take up the JOBS Act expeditiously so Americans can get back to work," Bruce Josten, a chamber lobbyist, said in a statement.