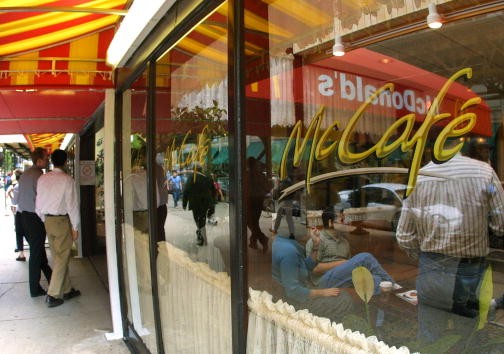 McDonald’s tried numerous tactics to bring back customers in 2014. To end the year, they launched The Corner in Sydney, Australia before the end of the year.

Remodeling a standalone McCafe in Sydney, The Corner mysteriously opened on Dec. 29, with little fanfare. It’s the brand’s first attempt at the growing market of high-end coffee, starting in the Land Down Under.

According to the Telegraph, it’s just the first of the four Customer Learning Labs the company plans to open. McDonald’s will launch 10 more The Corner cafes in 2015.

The interior of The Corner is subdued, missing the signature Golden Archers of the brand. A small McCafe is printed underneath the muted logo design outside the café.

The menu is entirely different from the usual McDonald’s and its affiliated café. Pastries, meals served with brown rice and Panini are served through a posh-looking salad and sandwich bar.

Manager of The Corner, Kyle Jarvis, said, “The only association we have is that we are a McCafe, but what we are offering is totally different to what we offer in McCafe.”

If the customer is looking for a Quarter Pounder, Jarvis said that they’ll be disappointed because they’re serving none from the usual McDonald’s menu.

The Corner’s menu changes daily and a self-service digital device allows customers to build their own burgers.

McDonald’s experienced a 2.2% drop in same-store sales in 2014. It has launched massive campaigns to boost the brand’s name such as hiring the Myth Busters to dispel the pink slime rumors surrounding the burger chain.