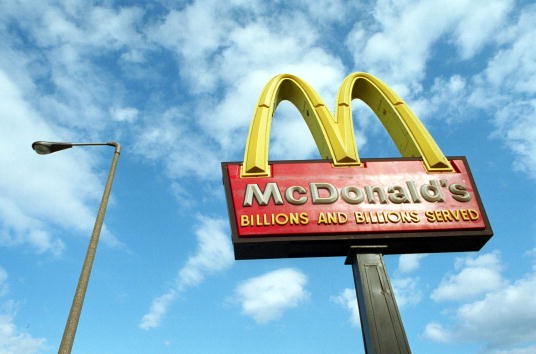 McDonald’s released Friday a new animated ad featuring a number of the most iconic couplings in pop culture.

The ad entitled “Archenemies” highlights the most well-known rivals in pop culture such as Batman and Joker and Dorothy and the Wicked Witch of the East. Instead of bickering, the so-called archenemies are seen sharing the love.

From the lumberjack giving a flower to the Giving Tree to the knight offering a sundae to the fire-breathing dragon, the animated ad presents rivals showing affection to each other, including sharing McDonald’s food.

The burger chain hopes that the new ad that re-invents the “I’m Lovin’ It” slogan by focusing more on the “lovin’” part can bring back customers. In 2014, they have suffered losses and experienced a drop in same-store sales.

McDonald’s US chief marketing officer Deborah Wahl said, “This new focus will inspire everything we do moving forward, from advertising and marketing to how we interact with customers in restaurants and on social media.”

What Wahl called a “brand transformation” is just one of the many moves McDonald’s is trying to do to reverse the loss. The Golden Arches also listens to customers’ demand of trimming down the menu to speed up the service. McDonald’s also moves to encourage customers to ask questions about their food processing system, which they promise to answer truthfully.

In a video posted Monday, Wahl said that lately there’s an imbalance between lovin’ and hatin’ which spawned the video featuring the odd coupling sharing a McDonald’s meal.

In the coming weeks, the Archenemies ad will appear on TV and online ads.