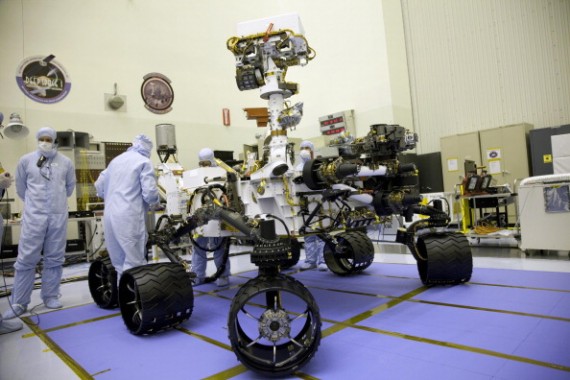 Only a few people have probably imagined future robots to look like what the National Aeronautics and Space Administration is currently developing. According to CNN, this robot, which is being worked on by the agency's Jet Propulsion Laboratory for disaster response purposes, has been designed in such a way that they look far from being a human that moves in an ape-like fashion.

While the robot does not have any heads installed on it, it does have eyes - plenty of it, as a matter of fact. The device has been equipped with seven different cameras that serve as its eyes. Dubbed the "RoboSimian," its four limbs are identical and functions not only as arms, but also as legs. The four limbs work seamlessly with each other, allowing the robot to move smoothly and problem-free across difficult surfaces.

In addition, the arms-legs is also able to pick up and manipulate items. There are also wheels incorporated into the robot, which it can use if the grounds are not that bumpy.

In the ongoing DARPA Robotics Challenge, the RoboSimian is the Jet Propulsion Laboratory's final entry. The competition, which runs for 27 months, provides some of the most impressive robotics professionals and experts with the opportunity to develop robots that are engineered for the purpose of serving as an emergency response tool.

According to EFY Times, RoboSimian can perform difficult roles such as pulling off debris from trapped survivors. This robot will definitely be a great help in times nuclear disasters.

This final NASA Jet Propulsion Laboratory Entry will be competing with eighteen other finalists, in which, all of them will have to drive a vehicle, go through rough terrains, pick up objects such as rubble, find a way to climb stairs, and perform other human-like actions and tasks. The winner will be awarded with a prize money amounting to $2 million.