‘All of Me’ Singer John Legend and ‘OWN’ CEO Oprah Winfrey Recreate History by Marching with Stars of ‘Selma’; 54-Mile March Tribute to MLK Vs. Racial Discrimination 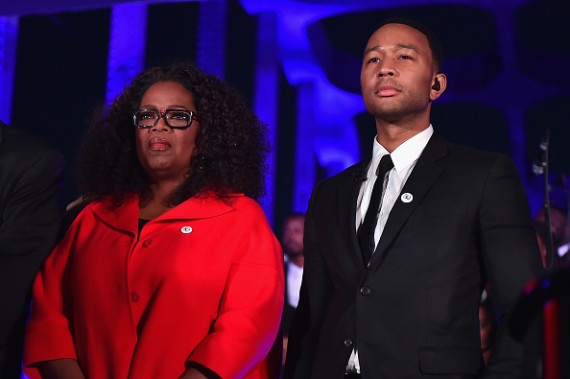 Oprah Winfrey and John Legend, together with the stars of the much-awaited film "Selma," marched together with hundreds of people in Salem, Alabama to pay tribute to Martin Luther King Jr.   According to Us Weekly, Salem, Alabama is where the Civil Rights Movement protest originated when the pastor led the 54-mile march in 1965 eventually paving the way to end segregation.

Oprah Winfrey and John Legend were not the only ones present during the march.  Soundtrack contributor Common was also present as well as director Ava DuVernary and actor David Oyelowo.  The group marched towards Edmund Pettus Bridge where they prayed together with hundreds of participants.  Common and Legend performed the movie's Oscar nominated soundtrack for Best Original Song "Glory."

Producer Oprah Winfrey said in her speech praised those people who marched in 1965.  According to Winston-Salem Journal,  Winfrey said, "Look at what they were able to do with so little, and look at how we now have so much.  If they could do that, imagine what now can be accomplished with the opportunity through social media and connection, the opportunity through understanding that absolutely we are more alike than we are different."

"Selma" chronicled the life of Martin Luther King as a civil rights leader,as the film shows demonstration and his appeal to then President Lyndon Johnson to help end racism.  The marches and demonstration helped pave way to the Voting Act Rights.

The movie "Selma" was nominated for Best Picture and Best Original Song.  This was seen as a disappointment by some but still, the people behind the film "Selma" continues to call for unity regardless of race.