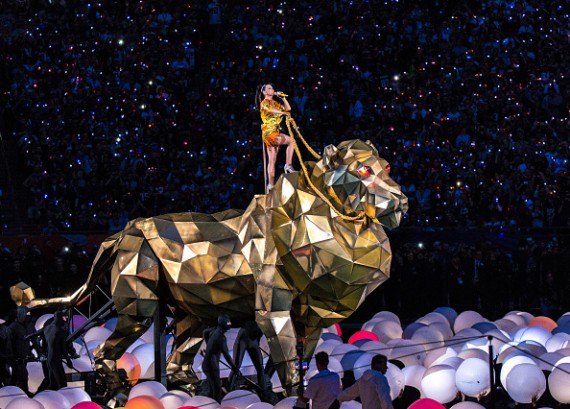 When Katy Perry took the stage at Super Bowl XLIX, she delivered a super performance that included what she claimed to be a first in the event, according in the Dailymail, and that's to bring "lions and sharks" to the stage.

Katy Perry's 2015 Super Bowl performance was nothing less than a glittering moment that pumped up the already hyped crowd. With thousands in attendance, Perry raised the roof in her blazing performances, all accentuated by a surprising four costume changes for the whole performance.

Perry's friend, Jeremy Scott, collaborated with her in planning her outfits and admitted it was certainly an ambitious idea at the time though that was nothing when Perry was more than willing to do those passionate, fanatical rides in the show.

She started her performance when she strutted on the field on top of a giant mechanical lion while singing "Fireworks."

According to ABCnews, the four costume changes that Katy Perry donned for Super Bowl 2015 was said to be a record breaking number in the history of the halftime event, and the crowd wasn't not disappointed either by the organizer's effort to give a groundbreaking show.

The "Fireworks" singer proved herself as versatile artist, especially when Jeremy Scott insisted on her wearing the hoodie costume she wore, while collaborating with Missy Elliot. Her show performance was tagged as one of John Mayer's rumored girlfriend's career highlights.

Billboard is tagging the show as explosive with Perry performing her finale, singing her perhaps most popular song, "Fireworks." With her silver long gown said to cost about $20,000 that shone like fireflies glittering on the platform. Katy Perry's 2015 Super Bowl costumes are said to be added to collection and will never be worn in her other performances again.