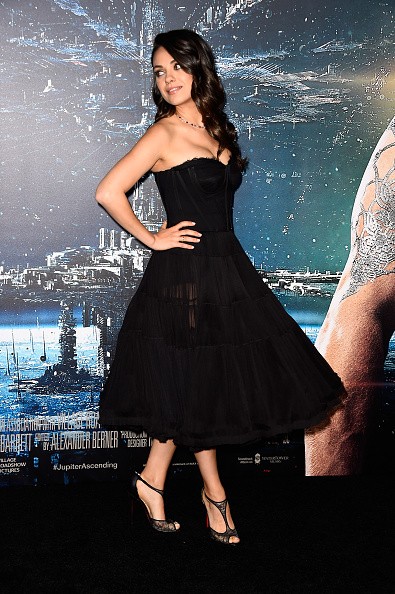 Just four months after giving birth to her daughter Wyatt, Mila Kunis is back on the red carpet promoting her latest film "Jupiter Ascending" and she looked spectacular.

According to Newscom.au, Mila Kunis also appeared on "The Ellen Degeneres Show" where she said: "She's a really good baby.  She was 9.5 pounds when she was born.  Newborn never happened.  Newborn diapers never happened.  And newborn clothes never happened.  She's four onths old and wears six-month clothing 6-9.  She's a big girl, y'all."

Ashton Kutcher was not present at the red carpet event as Mila Kunis left him with daddy duties. No worries though as her co-stars gladly escorted her to the said event.  When Kunis was interviewed if she and Kutcher is alreay married, she smartly avoided the question as she said, "I don't know! I don't know!  I don't know!

The couple has been famous for drawing the line between their personal and professional lives.

"Jupiter Ascending" is the first film that Mila Kunis is promoting after she gave birth.  It is a science-fiction film that tells a story about what seems to be an ordinary American girl.

According to Fandango, the story plays around Jupiter Jones, played by Mila Kunis, whose life turned to something unexpected when she met an ex-soldier, played by Channing Tatum. Tatum is the one who tells Jupiter Jones that she needs to fulfill her destiny.  Jupiter Jones cannot grasp the idea that she came from a powerful lineage from another planet, until she realizes that someone wants her dead.

"Jupiter Ascending" is a nice combination of special digital effects, stunts and action.

According to ET, Ashton Kutcher showed his support for Mila Kunis in the red carpet event, who's rocking a more fuller post-baby body, by sending a sweet recorded love note, which is a really nice gesture