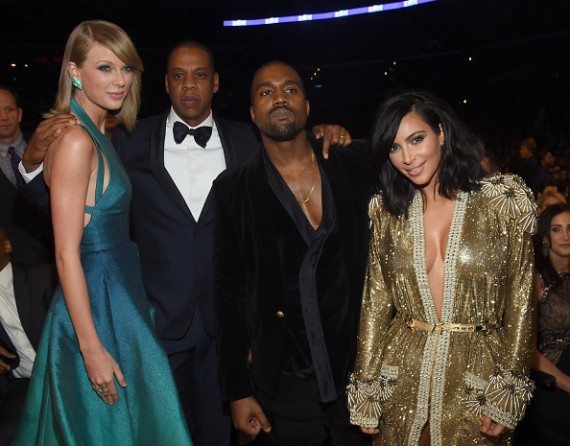 Everybody remembers Kanye West interrupting Taylor Swift's acceptance speech at the 2009 Video Music Awards, and it seems like the "Shake it off" singer and the rapper have patched things up at the Grammy Awards Show, according to E Online.

Talks about the Taylor Swift and Kanye West's incident that happened six years ago was brought out in the limelight when Kim Kardashian's husband jokingly mocked his actions at the 2015 Grammys, pretending to interrupt Beck for winning the "Album of the Year Award."

Due to Kanye West's stunt, the crowd couldn't help but think that history is again repeating itself.

West has accepted his mistake in the past when he interrupted Taylor Swift and grabbed the mic before the American rapper told everybody in attendance that Beyonce deserves the award better than the "Blank Space" singer. He said, "You know what? I wouldn't want a crazy drunk star cutting my daughter off also."

Taylor Swift, on the other hand, has managed to make fun of the situation by making several jokes about it online, where at one point, when the singer received two nominations at the 2013 VMA awards, she tweeted something about holding her mic tight if she ever wins an award again. It seems like all is now forgotten and both parties have moved on from that shameful and awkward incident.

According to ET Online, there was indeed a very contrasting picture at the Grammys compared to that of the 2009 VMA awards where nothing can seem to stop "On Sight" singer-songwriter West from disrupting Swift.

At the 2015 Grammys, Kim Kardashian's hubby was all smiles like he's never seen before - matured from being able to make a joke about the incident happened in VMA though West apologized before, it is said that he still believes that "Crazy In Love" singer Beyonce deserved the award.