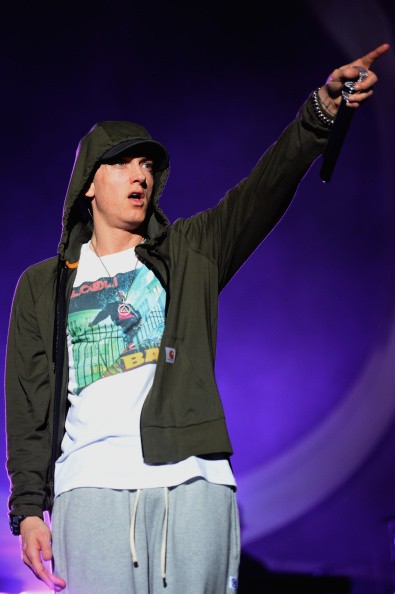 Eminem once made waves in the music industry. After a long period of time, he again emerged as the winner for Best Rap Album at the 57th Grammy Awards. It was the rapper's sixth award, securing his spot as one of the best emcees.

According to Yahoo Music, Marshall Mathers LP2 is Eminem's eight studio album and he remains as the only solo artist with fastest record sales in the United States.  His sixth Gramy award is another milestone in Eminem's career, after his long battle with substance abuse.

The list of the nominees back at the 2015 Grammy Awards for the Best Rap Album, posted by the Billboard, includes "The New Classic" (Iggy Azalea), "Because The Internet" (Childish Gambino), "Nobody's Smiling" (Common), "The Marshal Mathers LP2" (Eminem), "Oxymoron" (ScHoolboy Q) and "Blacc Hollywood" (Wiz Khalifa).

Eminem was not present to receive the award for Best Rap Album, though.

One of the nominees, Nick Young's girlfriend Iggy Azalea, earlier cried foul after Eminem made some derogatory comments about raping her. The Australian rapper said Eminem was old and could not think of anything other than to threaten young women.

Eminem is known to include his personal struggles in his songs that many listeners were able to relate to. In his previous albums, it's no secret how he dissed her mother and ex-wife Kim but in a turn of events and the creation of The Marshall Mathers LP2 album, Eminem is noted patching things up with his mother.

The controversial rapper even made the headlines for his explicit homophobic slurs and his long battle with substance abuse.

Eminem once again collaborated with Rihanna for the song, "The Monster" and the rap album "The Marshall Mathers LP2" is said to have been produced by the veteran Rick Rubin and his mentor Dr. Dre.