Jay Z, Beyonce Spark Speculation Of Cheating As They Are Snapped Arguing Inside Restaurant 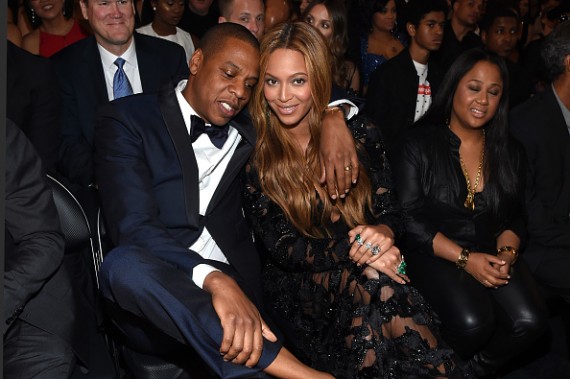 Beyonce and Jay-Z were reportedly seen having an argument inside a restaurant on Sunset Boulevard prior to the Grammy Awards on Feb. 8.

In a video captured by the International Business Times, an animated Beyonce can be seen motioning something to Jay Z while the latter has his eyes fixed on his cellphone. Apparently, Jay Z's obsession on his phone irked Beyonce so much that prompted the "Drunk in Love
singer to allegedly accuse the music mogul of cheating.

The report said that Queen Bey is convinced that her husband, Jay, Z, is cheating on her because of the amount of time he spends looking and talking on his phone. However, the power couple played the role of loving couple when they came to the Grammys, all looking happy and contented.

Whether the façade they showed was real or not, their effort to keep their problems from the public was very successful. A formal statement from the couple about the incident was not available as of now.

Rumors on Jay Z's cheating has been feasted on the media and Rihanna, Rita Ora and Rachel Royce were all dragged into the issue. Despite all the rumors and speculations, Beyonce maintained her composure in front of the publicand there is a possibility for the two to collaborate on an album by 2016.

It can be recalled that 2014 was a tumultuous year for the hot couple after a controversial video of Beyonce's sister, Solange, emerged on the internet. A scene was caught by the elevator's CCTV camera where the younger Knowles physically attacked Jay-Z, an incident no one ever expected.

In a video posted by TMZ, Solange violently attacked Jay Z in the presence of Beyonce and continued to do so even if a bodyguard held her to prevent her from making any more mess. The attack was reported to be triggered by cheating rumors on the music producer.