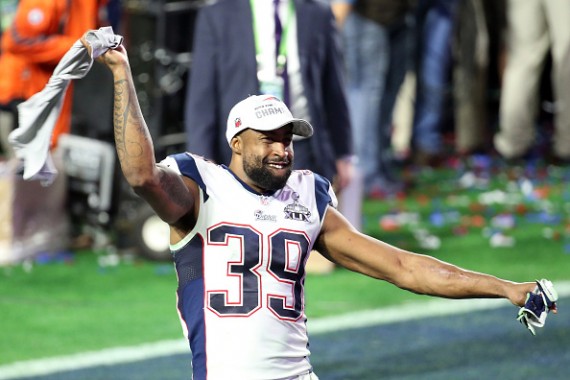 Kanye West's reported arrogance irked not only playes in the music industry but also sports. According to Yahoo Sports, Kim Kardashian's husband's stunt at the 5th Grammy Awards didn't quite sit well with Brandon Browner when he made sure his thoughts were heard on his Twitter account.

First, he mentioned how Kanye West did the offense the second time around, The first was with a 19-year-old girl who was just starting her career, Taylor Swift. He also wished he had been Beck on that fateful night and things could have been different. He also challenged the rapper to read a CBS article he retweeted about artistry and talent between the two.

Kanye West just made another foe in the sports industry.

But Brandon Browner did not stop with his criticisms over how Kanye West handled himself at the Grammys. He also did not agree with Kim Kardashian's husband's claims that Beyonce deserves the award saying.

Brandon Browner continued his stance, saying that nobody among the greats in the history of the music industry pulled a stunt similar to what Kanye West just did. He mentioned music icons such as Tupac, Jay Z and Marley.

An Eonline article showed how Brandon Browner pinned the tirade with a retweet of Beck-Beyonce meme that highlighted Beck's ability to play 16 instruments while Beyonce uses none and needs 16 songwriters to do hers.

Kanye West made a scene when he tried to disrupt Beck's acceptance speech for "Album of the Year" at the 57th Grammy Awards. Many thought the incident was funny, but some took the gesture as a petty, childish act from an artist of his caliber.

Grammy winner John Legend was among those who found the stunt it funny, but he shared the same sentiment with Brandon Browner about Beck's talent and what he has accomplished in the past, and that should not be belittled even if the younger generation has no clue about him.