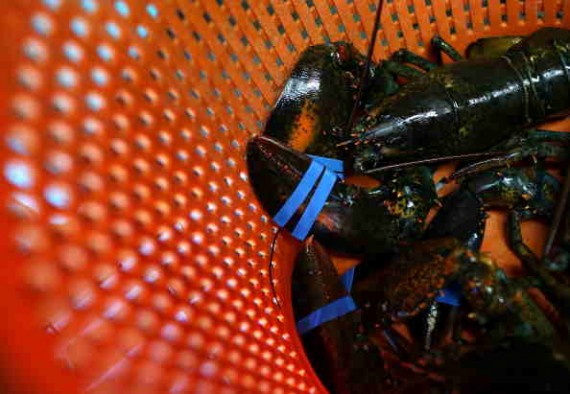 Exports of these bright red lobsters have increased by 45 times compared to 2009. They are said to bring prosperity and luck for the Chinese as Spring Festival demands to see these creatures on the table.(Photo : Jamie Sullivan )

CHINA - Lobster imports from the US is a fast moving and growing product industry in the Chinese market today. And with the Chinese New Year already here, the demand for these bright colored crustaceans just spiked significantly.

Chinese Lunar New Year, or Spring Festival, is a very important event for the Chinese people. Mostly this is the time when everything comes to a halt and families are reunited. A traditional mainland reunion dish comprises of mostly "prosperous" dishes which include prawns, fish and chicken. But this tradition is quickly catching up with modern times as the country's middle class is gradually developing a much sophisticated palate and looking to branch out to other dining delicacies.

Enter the growing demand for US imported lobsters. Lobsters are considered as a mark of prosperity. They are also recognised as lucky, due to their bright red color after being cooked, much like the dragon. This makes lobsters a must have on the Chinese New Year menu.

In Maine, where the heart of the lobster industry in the US is found, the shippers are unusually busy in these usually quiet mid-winter months filling up orders from halfway across the world.

Stephanie Nadeau, owner of The Lobster Co, a wholesaler in Arundel, Maine, said in an interview:  “There’s lot of orders, lots of demand right now – it is a race to get them there for Chinese New Year”.

According to a report on WWLP, American lobster exports to China have increased from just over $2 million in 2009 to more than $90 million last year. A single Maine wholesaler was said to export around 100,000 pounds of lobster each week.

Mike Fitzgerald of Schermerhorn’s Seafood in Holyoke, Mass., explained in the same article: “When you’re dealing with massive amounts China is buying for the new year, they’re going to ship 65,000 pounds in one shot, versus coming to me with 600 pounds.”

Once the lobsters get to China, they are sold at around $50 -$100 per dish in a typical restaurant.