Behind-The-Scenes Photos Of New 'James Bond' Movie ‘Spectre’! Daniel Craig Shoots Some Scenes In Rome! Will There Be Another Accident On Set? 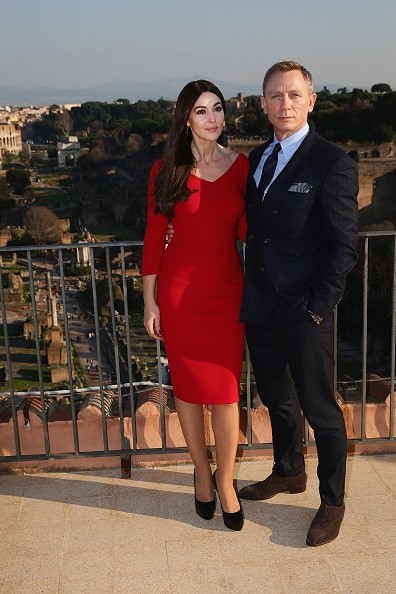 The cast and crew of the new "James Bond" movie "Spectre" was recently seen shooting in Rome.

Lead star Daniel Craig was wearing a designer suit matched with Nike Air trainers. That isn't the typical shoes that the secret service agent wears, but he may need it for some active scenes. Mail Online reported that the trainers could be cropped out during the final edit.

Apart from the 46-year old actor, the cars in the 24th installment also made headlines during their shoot at the Italian capital. Stuntmen drove the Aston Martin DB10 and the Jaguar CX75 in full speed down Tiber river's narrow footpaths. Spectators hold their breath as these luxury cars tried to avoid hitting the water. There were reports that one of these cars will end up in the river, but they haven't done the scene yet.

The website also shared photos of Daniel Craig (James Bond) and co-star Monica Bellucci (Lucia Sciarra). The duo was seen attending a funeral in Rome, which means that one of the characters in "Spectre" will die. Unfortunately, there isn't any confirmation yet as to whom the funeral was for.

Apart from Rome, the cast and crew will film in Mexico City, London, Morocco and Austria. There have been reports that Craig has been holding up the production due to his knee injury. The actor sustained that injury during a fight scene. His action scenes must be really intense for him to get into an accident.

According to The Hollywood Reporter, barely a week after that unfortunate incident, second unit assistant director Terry Madden fractured his legs severely while on set in Austria Second. A camera truck crashed into a barn that injured the crew member. Madden has worked on previous "James Bond" movies including "For Your Eyes Only" in 1981 and "Casino Royale" in 2006.

We can't blame Daniel Craig for slowing down the production of "Spectre." Maybe he is just taking extra precaution while filming the new "James Bond" movie to avoid any more accidents.