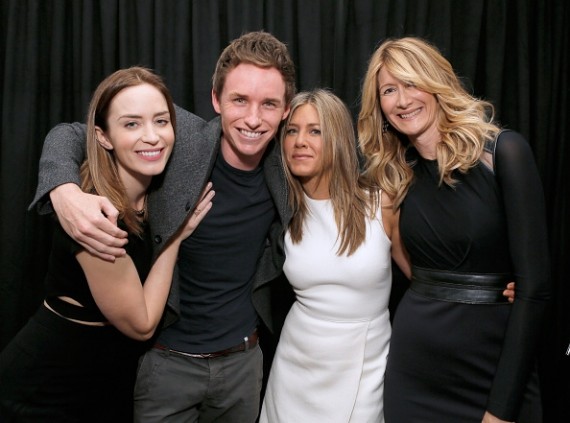 It looks like the wedding plans of Jennifer Aniston and Justin Theroux may not push through because of jealousy.

There have been reports that the 46-year-old actress enjoys flirting with other men and the latest guy she's linked with was Eddie Redmayne.

The 33-year old actor is married to Hannah Bagshawe, but that does not stop him from getting friendly with other female celebrities. "Jen and Eddie got VERY close after running into each other a lot on the Oscar circuit," a source told The National Enquirer (via Celeb Dirty Laundry).

"He smothers Jen with compliments and she laps up the attention. She says his accent and boyish charm are irresistible," their insider said. The British heartthrob gained international recognition for his roles in "The Theory of Everything", "Les Mesirables", and "Jupiter Ascending".

Eddie Redmayne is currently filming "The Danish Girl" alongside Amber Heard and Alicia Vikander. Maybe he is just naturally nice to all women, but that seems to bother Jennifer Aniston's fiancé. "Justin is not amused with the attention being lavished on his lady love. He saw that Jen and Eddie have been texting and calling each other, and confronted her about it," an insider revealed.

According to CDL, the rumors on Jennifer Aniston and Justin Theroux's wedding plans getting in trouble aren't true. First of all, the 43-year old actor isn't the jealous type and he could never be threatened by a married British guy.

Secondly, they assumed that Eddie is trying to get close to Jen because she's connected among the voters of the Academy and he wants to win the Best Actor award badly. After winning the BAFTA Award and Screen Actors Guild, Redmayne is eyeing the Oscars.

"Eddie is making sure that he schmoozes all the big players, and Jennifer Aniston is definitely a big player," the website said. "And trust me, Eddie lavishing this much attention on her [as opposed to say, Angelina Jolie] is probably a huge ego boost for Jennifer, especially since Eddie is so talented and so popular in the industry right now," they added.

So fans of Jennifer Aniston and Justin Theroux shouldn't worry much about their wedding because the rumor on them having a troubled relationship isn't true.