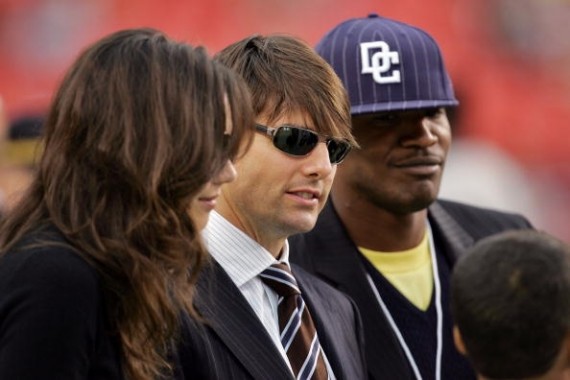 The dating rumors on Katie Holmes and Jamie Foxx started again when the two were caught flirting with each other last month.

Us Weekly shared the photo of the 36-year-old actress and the 47-year-old actor holding hands and playing footsie. It was taken in February, but only came out this month.

"Jamie is someone she can trust and have fun with," a mutual friend revealed. The former "Dawson's Creek" star got married to Tom Cruise in 2006 but their marriage ended in 2012.

"She's getting everything from Jamie that she didn't get with Tom," their source added.

The star of "Annie," on the other hand, already has a pet name for the actress. He allegedly calls her "my girl" and he can even be heard saying "My girl is calling."

So when did Katie Holmes and Jamie Foxx start dating? According to Yahoo UK, Tom Cruise's ex-wife and the actor first hooked up during a benefit held at the Hamptons and they were flirting up a storm all night.

However, Foxx claimed that he wasn't dating Holmes.

"The rumors are 100 percent not true. In fact, it's quite hilarious because we simply danced at a charity event along with a lot of other people," he told the New York Post as reported by.

A year after the alleged flirting at the Hamptons, Katie Holmes and Jamie Foxx allegedly spent time together at his mansion in California. According to Fox News, the two tried to keep their relationship a secret because he is good friends with her ex-husband and they even starred together in "Collateral" back in 2004.

"Jamie is being careful because he has a lot of respect for Tom," the insider added.

As the new photo surfaced, the dating rumors are most likely to be true and even some celebrity news sites confirm that Katie Holmes and Jamie Foxx are hooking up. Is she ready to fall in love again?