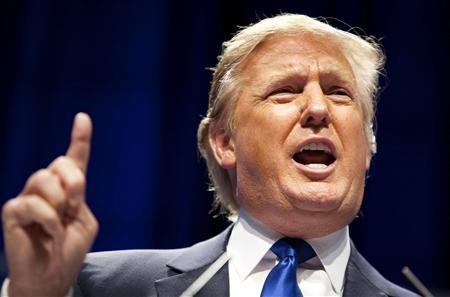 Donald Trump made his big announcement on Wednesday in which he asks President Barack Obama to release his college and passport applications an in return, Trump vowed to donate $5 million to a charity of Obama's choice.

The real estate mogul made his offer in a YouTube video released at noon today, two days after promising to make a 'gigantic' announcement about Obama which he said, could change the course of the presidential race.

Trump previously denied staging a publicity stunt, insisting the announcement is 'not a media event', but instead is 'about the United States of America'.

"Barack Obama is the least transparent president in the history of this country," Trump said in a video shot from his New York office and uploaded to YouTube. "I'm very honored to have gotten him to release his long-form birth certificate or whatever it may be."

"I have a deal for the president," Trump continued. "If Barack Obama opens up and gives his college records and applications and if he gives his passport applications and records I will give for a charity of his choice--inner-city children in Chicago, American Cancer Society, AIDS research, anything he wants--a check immediately for $5 million."

Earlier on Monday, Trump said in an interview with "Fox & Friends" that "I have something very, very big concerning the president of the United States. I will be announcing it sometime probably Wednesday and it's going to be very big."

Earlier speculation surrounding Trump's announcement was rumored to be about divorce papers that Michelle Obama handed to Barack some 20 years ago. Douglas Kass, a respected investor and friend of Trump tweeted a message that alluded to the divorce. 'High above the Alps my Gnome has heard that Donald Trump will announce that he has unearthed divorce papers between the Prez and his wife.' It turns out that Kass' prediction was incorrect.