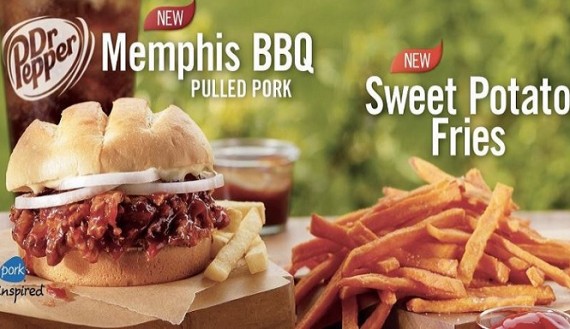 Watch out McDonald's, Burger King is rolling out a competitor to compete with the popular McRib sandwich.

The restaurant chain unveiled its Burger King Rib Sandwich on Tuesday which features boneless ribs a tangy sauce and a sweet bun. It will make its national debut on May 21, the company said.

Burger King is not stopping at one sandwich in its BBQ arsenal. No, they are releasing two more; the Memphis Pulled Pork and the Carolina BBQ.

"Our guests have grown to look for a variety of options," says Eric Hirschhorn, vice president of global innovation, according to USA Today. "It's not just about beef anymore, but other proteins like chicken and turkey and pork."

This is not the first time that Burger King has dipped into Bar-B-Que sauce in the menu. In 2010 they offered on-the-bone ribs named, "Fire-Grilled Ribs." That item cost nearly $9 and not many were sold.

According to Burger Business, this is the first time that one of McDonald's competitors has added a ribless BBQ sandwich to its menu.

Burger King's new BBQ sandwiches will cost around $3.50 for a sandwich and $5.60 for a combo meal.

eanwhile, McDonald's announced today three new quarter pounder burgers after it did away with its Angus burger last week.