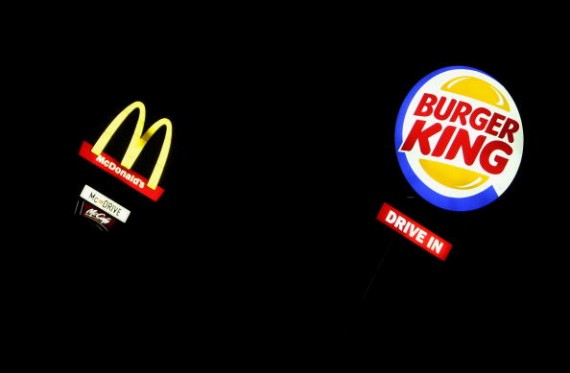 Fast food giant McDonald's Corp. turned down the offer of rival Burger King for a one-day truce to collaborate on a "McWhopper" sandwich for World Peace Day, saying the two brands can do better than that.

Burger King came out with full page ads on the New York Times and Chicago Tribune asking Oak Brook-based McDonald's to open in Atlanta for one day a pop-up restaurant that would sell a hybrid burger of the two chains' stop sellers-the Big Mac and the Whopper.

"We're being completely transparent with our approach because we want them to take this seriously. It would be amazing if McDonald's agrees to do this. Let's make history and generate a lot of noise around Peace Day. If they say no, we'll hopefully have, at the very least, raised much-needed financial support and consciousness for the great cause that is Peace One Day," Burger King said in a statement.

Bloomberg said the advertisement was in an open letter form, which called for the restaurant to be opened on World Peace Day on Sept. 21. The company chose Atlanta since it is located halfway between the headquarters of the two burger chains.

Bloomberg reported that Burger King also created a website called mcwhopper.com to promote the proposal, which included a recipe on how to combine the two sandwich and design for the employee uniforms. Burger King said the revenues from the McWhopper sale will be donated to a non-profit that promotes the World Peace Day

Burger King said a cease-fire in the burger wars will help in advocating world peace.

McDonald's, however, did not bite the offer.

McDonald's CEO Steve Easterbrook said his company loves the idea but shot down the proposal.

"We love the intention but think our two brands could do something bigger to make a difference. We commit to raise awareness worldwide, perhaps you'll join us in a meaningful global effort," he said.

Easterbrook also subtly said that comparing the rivalry of the burger chains to a serious problem is inappropriate.

"Let's acknowledge that between us there is simply a friendly business competition and certainly not the unequaled circumstances of the real pain and suffering of war," he said.

Easterbrook added Burger King may just call him next time it has a proposal.