McDonald's Worker in New York Faints After AC Breaks Down 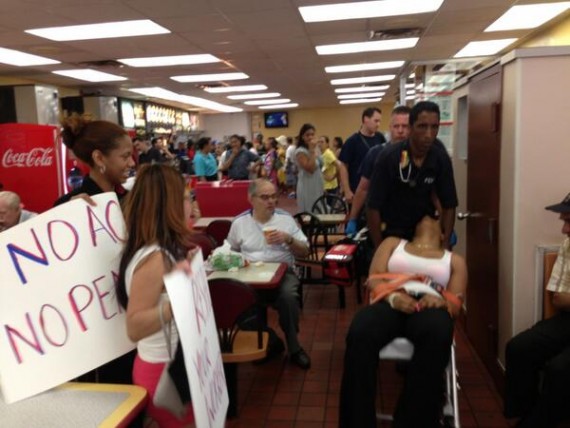 "Workers walk out at #4259Broadway McDonalds after being forced 2 work w/o AC on hottest day of yr. Worker collapsed" @GBNYChange tweeted out(Photo : Twitter/@GBNYChange)

Workers at a McDonald's in New York City were left with difficult working conditions when the air-conditioning broke down on Friday, leaving a co-worker hospitalized due to the stifling heat.

Temperatures in New York exceeded 95 degrees on Friday when the air-conditioning stopped working.  The McDonald's branch in question, located in Washington Heights, is an independently owned franchise managed by Dominga De Jesus, according to the company's website.

"In the middle of a heat wave like this, to be expected to stand in a hot kitchen with no air conditioning is inhumane and unsafe," employee Jamne Izquierdo, who has worked in the store for eight years, said in a statement. "We are  human beings. We've told McDonalds before that the air conditioning doesn't work and that we can't take the heat but they don't listen to us.  We can't take it anymore. No one should have to work like this."

The McDonald's employee who collapsed, Esheliz Méndez, had complained about the broken air conditioner numerous times, according to the Huffington Post. A repair was made last year after another employee collapsed, Villa said, but the cooling system broke again within a week.

"[The owners of the store] make fun of us because they think we're animals," another employee Luisa Villa said. "We're not animals. We're people. We don't want to die and you can certainly die from the heat, you know."

Employees began a strike outside the store, urging the McDonalds owners to take charge and fix the situation. City Council member Ydanis Rodriguez and state Sen. Adriano Espaillat turned out in support of the workers.