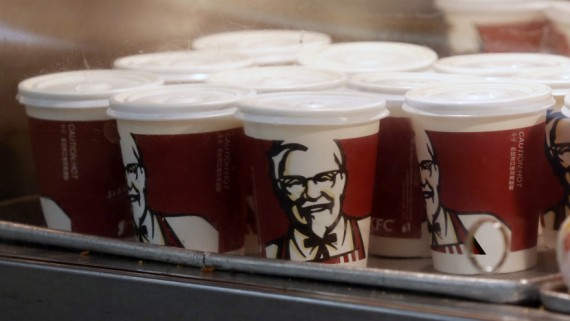 Chinese customers may want to think twice before getting ice in their drinks during their next trip to the popular fast-food joint. The Chinese government's official broadcast media reported that ice cubes found at the chain were 12 times dirtier than toilet water-and 19 times the national bacteria level standard.

In a program that aired Saturday night, China Central Television said reporters had recently tested ice samples from three fast-food chains and compared them with toilet water. The results were alarming as the ice from a branch of KFC in the city's southern Chongwenmen district were found to have levels of bacteria 12 times higher than the toilet water, and 19 times higher than China's standards for drinking water.

KFC's sales in China - its largest market - already have been hurt over the last year by fears related to an Avian flu outbreak in the country and negative publicity related to a chicken supplier. The latest news may further fuel the decline.

KFC apologized to the consumers in a statement posted to its official account on Sina Weibo, a Twitter-like micro blogging,  hours after the CCTV program aired."We are sincerely sorry that this sort of situation has occurred," the statement read. "Our executives have reached the store to look into the case."

KFC is a division of Louisville-based Yum! Brands Inc. According to a Business Week report, Yum Brands spokesman Jonathan Blum said the company is investigating the report about an isolated incident.

Here is a look at some of the footage from the CCTV report (link in Chinese).