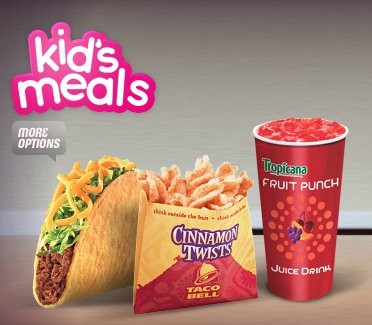 Taco Bell is the first major fast food chain to drop kids meal options from its menu, as the company says profit margins are low and prefer to focus on other target markets.

This move makes Taco Bell the first national fast food franchise to get rid of its kids' meals altogether, and public interests groups are pleased with the company's move.

Many experts have attributed fast-food restaurants as the source of obesity problems in the U.S., naming them as the biggest culprits in a growing fatter nation, in particular, children.While McDonald's has gotten the bulk of research and media speculation, other fast food restaurants have not been found faultless in the once growing rates of obesity amongst adolescents.

Taco Bell CEO Greg Creed explained why the company has decided to remove kids meals and toys from their menu offering:  "Pioneering this change on our menu is a bold move for our industry, and it makes sense for Taco Bell." As it's the first national fast-food restaurant to do this, will others in the industry soon follow Taco Bell's lead?

"Kid's meals and toys simply no longer make sense for us to put resources behind," said Greg Creed, Taco Bell's CEO, in a statement on Tuesday. In an interview with Huffington Post, Creed goes on to explain that he doesn't believe kids meals don't sell, but instead feels as though "...a kid's meal is just inconsistent with the edgy, left-of-center millennial brand."