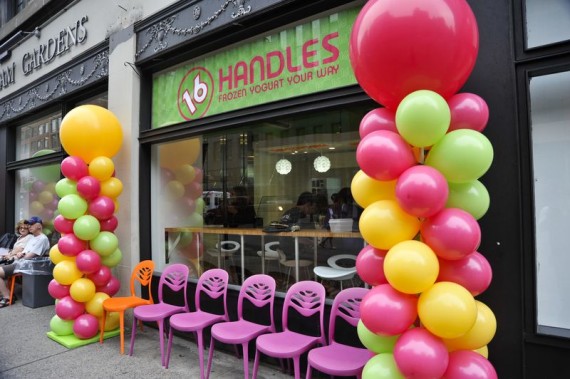 Frozen yogurt and dessert company 16 Handles has added two new flavors to its newly-launched Artisan collection of self-serve frozen yogurt and toppings for an end of summer bang according to restaurantnews.com.

The new additions to the menu include a Peanut Butter Fro-Yo and Peach Sangria Sorbetto, which are available for people of all ages. Founder Solomon Choi told Restaurant News people should go all out towards the end of the season.

"The end of summer is meant for self indulgence," Choi said. "Not many can resist the timeless taste of a delicious PB&J. And for those with a thirst for something a little more refreshing, our Peach Sangria Sorbetto will do the trick."

Those wanting a stronger taste can try the fat free Peach Sangria Sorbetto which has peaches and a sangria flavor restaurantnews reported. In addition to the new flavors, 16 Handles is testing new floats throughout all of its stores in New York City.

The company's artisan collection is created by chefs and experts in the culinary arts. 16 Handles was established by Choi in 2008 in what was the first frozen yogurt brand to bring self-serve frozen yogurt to New York City.

Thirty-eight locations currently exist throughout the states of New York, New Jersey, Connecticut, Massachusetts, Maryland and Florida restaurantnews.com reported. Another 50 are expected to open by the end of the year.

The company serves its frozen yogurt in biodegradable packaging and spoons, and plants 16 trees a day as part of a collaboration with non-profit organization Trees For The Future.