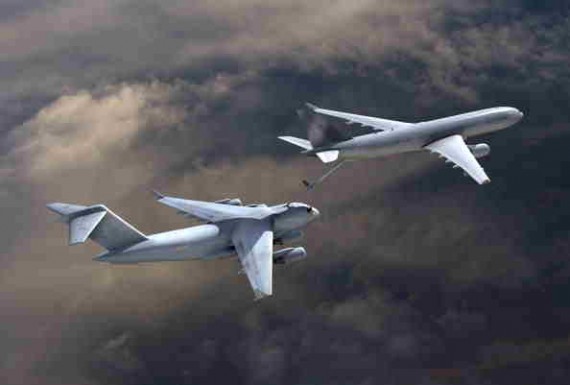 The Boeing Co. and the U.S. Air Force (USAF) have successfully completed the first flight of the KC-46A Tanker aircraft, according to a press release issued by Boeing.

The successful flight has opened an opportunity for Boeing and USAF to proceed with aerial refueling and Milestone C testing.

Boeing said in the press release that pilots performed several tests on the plane like operational checks on the engine, flight controls, environmental systems, and a test flight at the maximum altitude of 35,000 feet before landing.

The plane conducted its first flight on Friday, September 25, 2015, took off at Paine Field at 1:24 p.m. (PST) and landed four hours later at Boeing Field in Seattle.

Col. Christopher Coombs, the program manager of the USAF KC-46 System, said in the press release that the first flight of the tanker plane is a milestone.

"This first tanker flight is a key milestone for the program and we'll now begin free air stability tests and flight controls of the boom and wing aerial refueling pods (WARPs) before conducting aerial refueling tests where the KC-46 will make contact with other military aircraft down the road," he said.

Tim Peters, the vice president and program manager of Boeing's KC-46 tanker, also said in the press release that the test flight shows they are on the right track.

"Today's flight reinforces that we are moving in the right direction and are on track to begin planned Milestone C testing later this year," he said.

Charles Ramey, a spokesman from Boeing, told the Defense News that following the successful flight test, the company and USAF will conduct the next series of flight tests for the KC-46 program.

The next tests will include the team deploying the refueling boom and the wing aerial refueling pod to check for stability.

He also told the Defense News that, as part of the Milestone C testing, a full-up aerial refueling flights will be conducted as well.

Defense News also reported that the successful first flight test keeps Boeing on track for the decision of the Milestone C, a formal approval from the Pentagon for production, between January and April 2016.

The KC-46A is a multirole tanker that the company is building for the USAF that can refuel all allied and coalition military aircraft compatible with international aerial refueling procedures and can carry passengers, cargo, and patients, according to the press release.