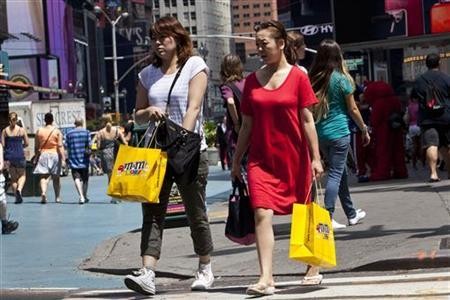 British retailers are set to enjoy their best growth in Christmas sales since the financial crisis, according to a report published on Monday which forecast consumers would spend at least 2 billion pounds ($3.19 billion) more than in 2012.

Market research specialist Verdict forecast spending in the fourth quarter would rise 2.2 percent from the same period in 2012 to 88.4 billion pounds - the best since 2007 when fourth-quarter spending grew 3.1 percent to 82.4 billion pounds.

Improving consumer confidence and job creation, along with a pick-up in the housing market, were some of the reasons cited by Verdict, which also pointed out that a baby boom during the recession meant consumers now have more children to buy Christmas presents for.

Government data indicates the outlook is improving for UK consumer spending, which generates about two-thirds of gross domestic product, but retailers are still wary as inflation continues to outpace wage rises.

Verdict also forecast a surge in online spending this year because Christmas Day falls on a Wednesday and consumers can thus use retailers' online "click & collect" services to pick up goods ordered online as late as Monday December 23.

Verdict said consumer confidence was also being lifted by events such as the awarding of compensation payments for mis-sold payment protection insurance (PPI) and windfalls from the flotation of the Royal Mail, which "have a further halo effect of boosting the view that at last things are getting better."