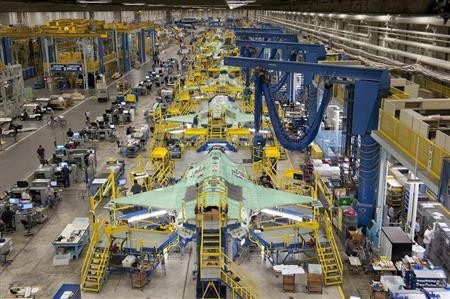 "A Boeing-Lockheed teaming arrangement leaves Northrop as the odd man out," Loren Thompson, a defense consultant out of Virginia told Reuters. "It would be tough for Northrop to compete against a Boeing-Lockeed Martin bomber team, which would have greater resources and probably a greater ability to bid aggressively."

The Air Force will purchase up to 100 new bomber planes for a maximum of $550 million a plane. The number reflects the initial cost for weapons. It does not include building of the planes, or hangars to store and maintain them Reuters reported.

The group has put $581 million toward the program so far, in an effort that began last year. Northrop Grumman Corp, which also builds B-2 stealth bombers is expected to challenge Boeing in order to be the company selected to build the plane for the program. Reuters reported.

"The LRS-B is a top modernization priority for the Air Force and critical to our national security," Ed Gulick, an Air Force spokesman told Reuters. "The Air Force looks forward to working with all participating industry partners on this very important program."

It's anticipated Boeing, who has been involved in plane bomber plane programs since World War Two, will be the main contractor in the new program while Lockheed is expected to serve a subcontractor role.

"The department is looking at this as an absolute necessity and they are absolutely committed to a competition. They haven't penciled anyone in," Brett Lambert, a retired industrial official from the Pentagon told Reuters. "That's the great thing about competition: it often surprises you. "The easy solution, given the budget environment would have been to terminate the program, but the department made a conscious decision to keep the design teams in place."