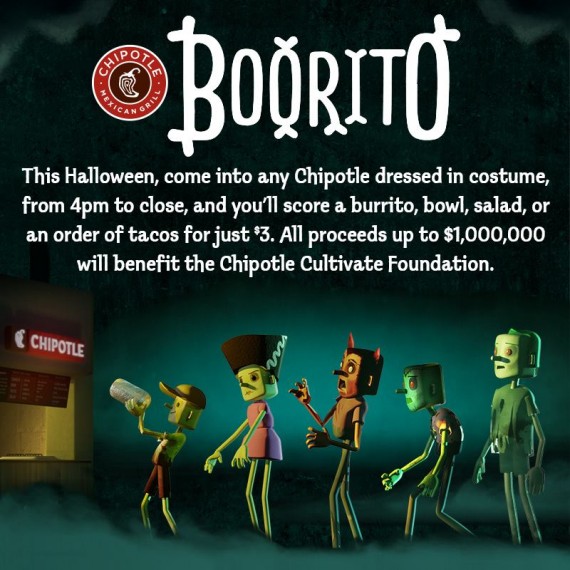 Chipotle is one of many franchise restaurants offering free foods, and discounts on items for Halloween.(Photo : Chipotle Facebook Page)

Chipotle is offering customers their infamous Burrito Bowl for $3 as part of the restaurant chain's yearly "Boorito" promotion in conjunction with the company's Chipotle Cultivate Foundation. Customers who enter one of the company's restaurants receive the bowl, salad, or tacos from 4 p.m. until closing. The initiative has raked in $3 million.

Customers, both adults, and kids, who walk into any Krispy Kreme doughnut location donned in a Halloween costume will receive a doughnut at no cost.

Boston Market, Longhorn Steakhouse, Olive Garden, Red Lobster, the Village Inn, and Wendy's also have promotions which require a coupon Parade.com reported. Families receive a free kid's meal when they buy an adult dish at Longhorn Steakhouse. Participants need to like the restaurants Facebook page, before their coupon is sent to them by e-mail.

Customers who bring in a coupon, obtainable through e-mail after liking Red Lobster's Facebook page are eligible for one free kid's meal when they buy an adult dish.

Village Inn customers will be given a pumpkin pancake at no cost with the purchase of an adult meal.

The purchase of a junior frosty Halloween book for a $1, which has coupons for junior frostys at no charge, are available at Wendy's.

Families at Olive Garden can get a free kid's meal when they buy an adult meal, with a free subscription of the franchise chain's e-mail newsletter. Those who have never received the company's newsletter can get an appetizer or dessert at no cost.

"Halloween isn't a day you're going to see a lot of kids in restaurants-they're trick or treating," notes Jay Spenchian, executive vice president of marketing at Olive Garden told News 10. "We see this as an opportunity to help drive additional traffic into the restaurant on an historically slow day."

According to News 10, 6,000 families with children dressed up visited Olive Garden last year.