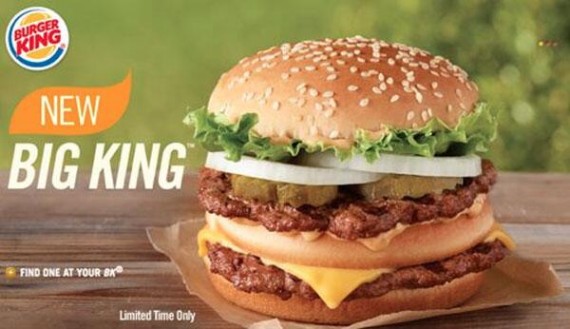 Burger King previously offered the 510 calorie burger for a short time, but it did not have an extra bun in between the ingredients like its competitor, McDonald's does with their 550 calorie Big Mac burger.

The news is the company's latest development since it attempted to alter its menu with items similar to its competitor McDonalds. These include changes made last spring such as fruit shakes, chicken snack wraps, and specialty coffee drinks.

3G capital and Warren Buffet's Berkshire Hathaway bought Heinz this year in a partnership. Its new CEO, Hees, is also a partner of 3G capital, which recently bought Burger King. Hees is also Burger King's vice chairman of the board.

The company has also introduced its new McRib sandwich, chicken nuggets, and new healthier, and lower calorie Satisfries in September.

According to the statement, Burger King intends to give away more than 10 million value-size orders of Satisfries, which usually cost $1.29.