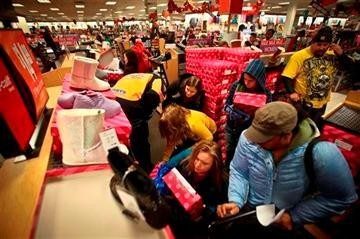 A record fifteen thousand shoppers had already assembled outside Macy's main store in New York City prior to its 8 p.m. opening Thursday the Associated Press reported. The number is up considerably from 11,000 in 2012.

Lundgren was pleased with how numbers appeared to start the holiday shopping season. "So far, so good," he told the AP.

Lundgren also said workout gear, womens shoes, boots, and sweaters were doing well. "Off the charts successful," he told the AP. Shoppers also found promotions for a bedsheet pack handy. "Those were selling like crazy." Other items included kitchen appliances such as blenders, coffee makers, a $98 Nutribullet food appliance, and women's handbags.

Ninety-percent of Macy's employees who worked Thanksgiving night were full-time with the company.

The concept has been criticized through protests at many stores throughout the county including Wal-Mart, but several of Macy's 176,000 full-timers were inclined to receive overtime compensation.

"They preferred 8 to midnight," Terry Lundgren, chief executive officer at Macy's told The San Francisco Chronicle. "They get time and a half and finish at 4 a.m. and are ready to go shopping with their friends. There were more customers this year than last year. Customers are starting their shopping journey on their phone, but they want to touch the cashmere and try on the shoe and boot to make sure it's just right."

Other stores joined in on offering pre-black friday events. These included: Kmart which is in the middle of a 41-hour consecutive streak until 11 p.m. Black Friday. The company opened at 6 a.m. Thanksgiving Day.