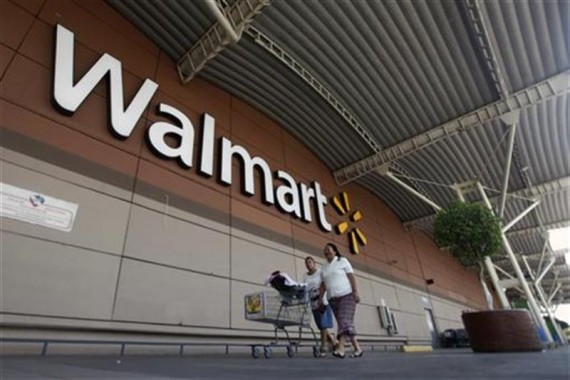 Wal-Mart is one retailer participating in Cyber Monday.(Photo : Reuters)

Two shoppers at a Wal-Mart in Tazewell, Va. were arrested for their roles in an altercation in the retailer's parking lot Thursday night the Associated Press reported.

Christopher Jackson, 35, was reportedly awaiting a parking space in the lot at the same time Ronnie Sharp, 61 started to resonate the horn on his steering wheel according to the Tazewell County Sheriff's Office the AP reported.

"People were running away, people were scattering," Sheriff Brian Hieatt told the AP. "It was lucky we were there within seconds. They don't know if your rifle's loaded,"

Jackson and Sharp were released from the Southwest Regional Jail in Tazewell County after their family members funded each of their $5,000 bond. Jackson received medical treatment on his gashes prior to jail.

Both will be arraigned next week.

The incident is the fourth to have happened at a Wal-Mart in the United States.

An officer fractured his wrist when attempting to break up a fight as people lined up outside of a Rialto, Calif., Wal-Mart Thursday night for a pre-black friday event The San Bernardino County Sun reported.

The officer was transported to St. Bernardine Medical Center with a fractured wrist according to police. The Sun reported.

The incident was one of three fights at the 1610 S. Riverside Ave. store. Two more happened in the store involving merchandise.

"The fight at the Rialto store was an unfortunate and isolated incident to an otherwise very safe event," corporate spokeswoman Betsy Harden said corporate spokeswoman at Wal-Mart told The Sun. "Providing our customers with the best and safest shopping experience is always our top priority."