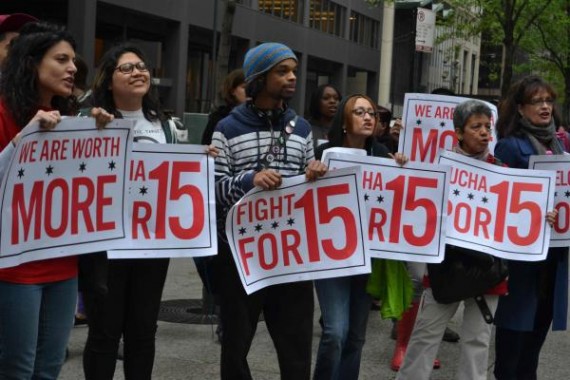 Fast food employees in 100 cities are expected to continue their fight Thursday with the continuation of protests USA Today reported Tuesday.

"(Past demonstrations have) have fallen well short of their purported numbers," the National Restaurant Association told USA today.

Participants will be fighting for higher wages of up to $15 an hour rather than their current hourly rate of $7.25 an hour or $15,000 a year. This comes after the Service Employees International Union's continued efforts to raise awareness about low wages, and fight for more. Over two million members work in the health care, and janitorial fields among others.

According to USA Today, service at some of the restaurants could be full of protestors, while others could have very few disruptions.

"They understand they're not going to win from a one-day strike," Kendall Fells, an organizer for Fast Food Forward told USA Today.

Those involved want to fix franchise restaurant chains like McDonalds, and Burger King's business model of offering food items at low prices, in order to grow in a struggling economy.

United State Senate Majority Leader Harry Reid (D) Nev., and other states have been working on legislation to increase wages before the year is out.

New Jersey has already approved legislation to increase its wages to $8.25 an hour. California, Connecticut, and Rhode Island have already increased their wages.

Workers protested the $7.25 an hour pay and fought for the minimum $15 an hour this summer in cities throughout the United States including Memphis, Raleigh, N.C., and Tampa.

The average pay for fast food workers across the United States is a little more than $9 an hour which amounts to $18,500 a year CNN Money reported. The number is less than the Census Bureau's poverty income threshold level of $23,000 for a family with four people.