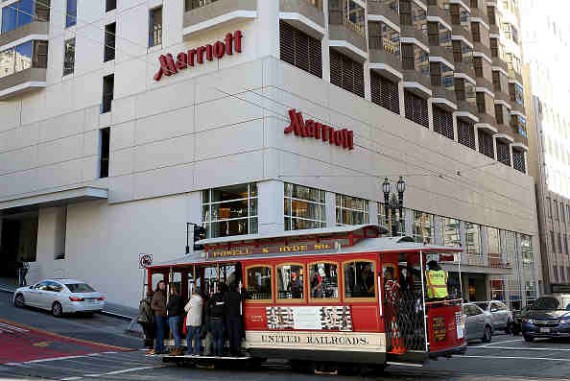 Marriott International, Inc. has announced in a press release that it will be acquiring Starwood Hotels & Resorts Worldwide, Inc. for $12.2 billion.

The acquisition makes Marriott the largest hotel company in the world.

Marriott said in the press release that the combined company will be operating or franchising more than 5,500 hotels with 1.1 million rooms.

The combined company will also be spanning the globe in over 100 countries.

Marriott adds in the press release that the transaction combines their strong presence in the luxury and select-service tiers, as well as the convention and resort segment, with Starwood's leading lifestyle brands and international footprints.

The combination of the two companies creates a more comprehensive portfolio.

Arne Sorenson, the president and CEO of Marriott, said in the press release that the reason for their combination with Starwood is growth.

"This is an opportunity to create value by combining the distribution and strengths of Marriott and Starwood, enhancing our competitiveness in a quickly evolving marketplace," he said.

Bruce Duncan, the chairman of the board of directors at Starwood, adds in the press release that the combination with Marriott "provides the greatest long-term value for our shareholders and the strongest and most certain path forward for our company."

"Starwood shareholders will benefit from ownership in one of the world's most respected companies, with vast growth potential further enhanced by cost synergies," he said.

Reuters adds that two sources briefed on the deal said that Starwood shares had rallied on media reports that the company was in talks with several potential buyers.

The sources, who asked not to be identified because they were not authorized to speak on the record, said that Starwood left "no stone unturned" in its process of seeking a buyer.

Stocks of hotels and airlines weakened due to the heightened concerns that the attacks on Paris on Friday could curb travel.

Under the terms of the agreement, Starwood shareholders will receive 0.92 shares of Marriott common stock and $2 in cash for each share of Starwood common stock, according to the press release.

Based on Marriott's 20-day volume weighted average price ending on November 13, 2015, the transaction has a current value of $72.08 per Starwood share.

Marriott adds in the press release that they expect the transaction to close in mid-2016.