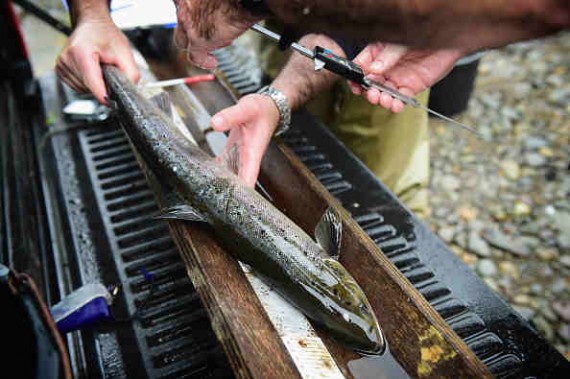 The FDA said that the genetically engineered Atlantic salmon is "safe to eat."

A comprehensive analysis of the scientific evidence has shown the FDA that the AquaAdvantage Salmon meets the statutory requirement for safety and effectiveness under the Federal Food, Drug, and Cosmetic Act, according to the press release.

One of the requirements that the genetically engineered fish needs to meet is that the food coming from it is safe to eat.

The FDA adds in the press release that the recombination DNA (rDNA) construct that AquaBounty used on the fish is safe for the fish itself.

The AquaAdvantage Salmon also meets the sponsors claims that the fish grows faster.

The FDA adds in the press release that the AquaAdvantage Salmon is as nutritious as the not genetically engineered farm-raised Atlantic salmon.

The agency also said that there is also no biological difference in the nutritional profile of the genetically engineered salmon and the farm-raised one.

Bernadette Dunham, D.V.M., Ph.D., the director of the Center for Veterinary Medicine of the FDA, said in the press release that AquaBounty has met the regulatory requirements for approval.

"The FDA has thoroughly analyzed and evaluated the data and information submitted by AquaBounty Technologies regarding AquAdvantage Salmon," she said.

The New York Times adds that the approval caps a long struggle that AquaBounty had experienced.

The company first approached the FDA about the genetically engineered salmon in 1990.

The New York Times adds that the approval of the AquaAdvantage Salmon has been opposed by some consumers and environmental groups.

They argue that the safety studies were inadequate and that the populations of wild salmons could be affected if the genetically engineered fish were to escape into the oceans and rivers.

The New York Times adds that the agency made its initial determination that the fish would be safe to eat and for the environment more than five years ago.

The Center for Food Safety, a consumer advocacy group, said that they would file a lawsuit to challenge the approval.