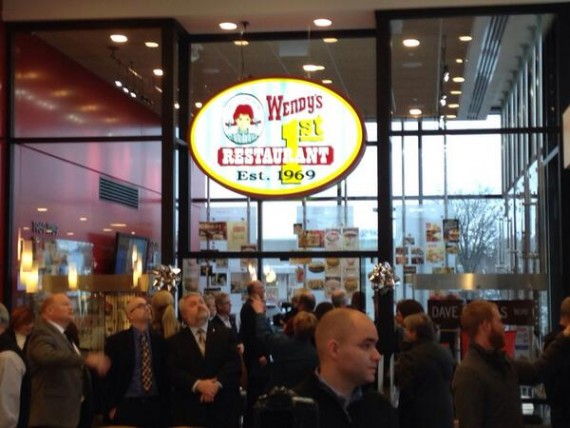 There is an exhibit that displays Thomas's torch held prior to Atlanta's 1996 Olympics, The Dispatch reported when construction was about to begin. A pick-up window sign used in the beginning of the restaurants existence is also included.

Customers can see a timeline of how Wendy's has fared throughout the years, a renovated table and chairs that used to be in the franchise chain's first restaurant, a menu painted by hand taken from the company's second location, and a griddle the company grilled meat on for the first time.

Visitors are also able to see what uniforms looked like back in the day, how it promoted itself across the globe including its Where's the Beef campaign. There are also pictures depicting Wendy's founder Dave Thomas, with various United States president and celebrities including one recognizing Thomas's charity, the Dave Thomas Foundation for Adoption.

Work on the 4,000 square-foot structure, slightly larger than a typical restaurant of its size, began in August, and was completed for opening Tuesday The Dispatch reported.

Wendy's shut down and destroyed a nearby location west of the construction site.

Wendy's expects to build 25 new locations under the new theme, while renovating 100 additional ones The Dispatch reported. Forty are expected to have the company's new vision while 150 have applied since updates began in 2011.