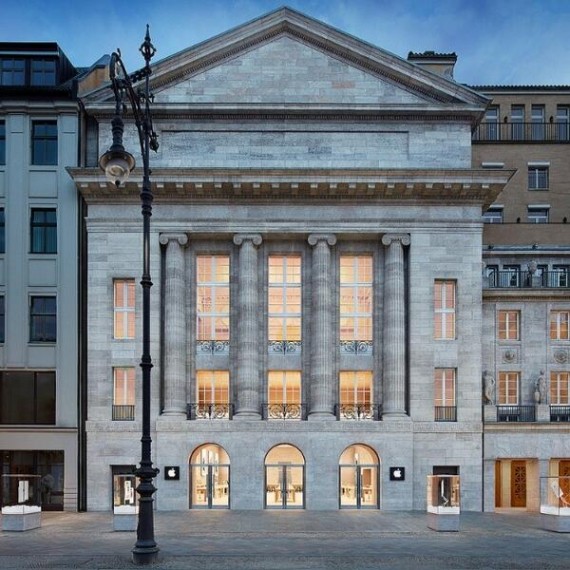 Apple products were taken from the company's location in Berlin, Germany this month after a car ran through its entrance.(Photo : Twitter Photo Section)

Two people reportedly went through the front windows of an Apple Store in Berlin, Germany with an Opel Corsa taking off $137,000 or 100,000 euros of electronics including laptops, iPads, and iPhones Dec. 9 according to police Bloomberg.com reported Monday.

"These are not amateurs," Berlin police department spokesman Thomas Neuendorf told Bloomberg. "We suspect that we're dealing with a gang."

The Apple store, affected, sits on Kurfuerstendamm, which unlocked its doors for the first time in May following over two years of preparation Bloomberg reported.

The store is Apple's 12th in Germany, and is in a refurbished 100-year-old theater situated in a reputable shopping area according to information from Apple Insider.

Other businesses in the mall implemented preventative measures to make sure their merchandise does not get stolen Bloomberg reported.

Two other similar incidents have occurred in the United States this year at Apple stores in Chicago, and Temecula, Calif Apple Insider reported.

The Chicago incident sent one person to the hospital in January after a Lincoln Town Car reportedly went off the curb, and flew through the air before barging through the store's front entrance Apple Insider reported.

A BMW X-5  was driven into the Temecula store when an occupant got out, and grabbed iPhones and iPhods Apple Insider reported.

Equonne Howard, 22, the driver of the vehicle, busted two of its tires, and replaced one with another by the Apple store in September Apple Insider reported. Howard then reportedly repaired the second one with Fix-A-Flat he reportedly stole from a 7-11.