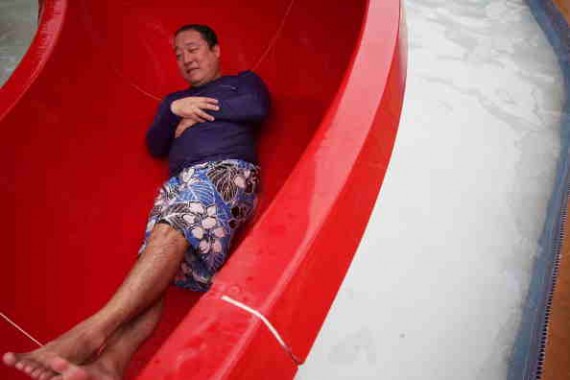 Kevin Dumont, the owner of a water park in New Hampshire, has decided to leave the slide tower after 17 days of chaining himself to the tower, according to a report from ABC News.

Dumont ended his quest due to failing health and the lack of a financial investor.

ABC News adds that Dumont climbed the slide at Liquid Planet on November 9, 2015, in a bid to attract investors.

Dumont was looking for investors to save the waterpark from being auctioned off by the bank.

Dumont created a GoFundMe page  to accept donations to help save the waterpark, and said on the page that "the bank has foreclosed on me and is auctioning the property on December 2nd."

"I am looking for a person, a group of people or a company that would partner with me, pay off the bank debt and save yet another small business from failing," he said.

Dumont was able to raise $1,945 out of the $1 million goal that he is aiming to get from the GoFundMe page.

ABC News adds that Dumont needed a total of $1.6 million to get the property, including his home, off the auction block.

Dumont said on his Facebook page that he couldn't find investors to save his waterpark and that a doctor thinks he has developing pneumonia.

"I had a number of interested parties, but there just wasn't enough time to get the details worked out before the December 2nd auction," he said.

Dumont, though, experienced several problems as two wet summers have kept customers away and a series of financial problems immediately followed.

ABC News adds that the state temporarily shut down two of the park's new waterslides late this season.

The slides were found to have high levels of bacteria and were put up without a required review.