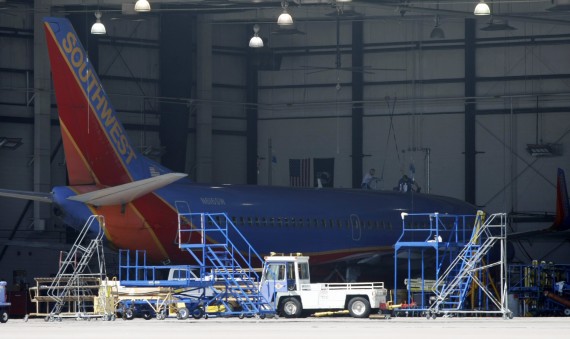 A man struck the engine of a Southwest Airlines flight on the way back to a terminal at Phoenix Sky Harbor International Airport Wednesday.(Photo : Reuters)

A man was arrested Wednesday after allegedly sprinting onto the Tarmac and taxiway at Phoenix's Sky Harbor International Airport The Arizona Republic reported Thursday.

Robert Bump, was cuffed on suspicion of entering a restricted area, a class one misdemeanor according to police The Republic reported. Bump also reportedly went over a barbed wire fence The Republic reported. The United States federal aviation administration requirement calls for a 6-foot fence, two feet taller than the airport's current 8 to 9 foot fence protected with barb wire.

A Southwest Airlines flight was attempting to pull into the taxiway, and had to shut down the plane's engine after the pilot was informed of the incident after police were told.

Bump then reportedly struck the engine using his hands on his way to the terminal according to police The Republic reported.

"He's lucky to be alive," Deborah Ostreicher deputy aviation director told The Republic. "We are one of the busiest airports in the country and world. You are safe as a traveler. As someone trying to do this, you're in grave danger. It was the people that made this work."

Officers arrived on scene just in time to secure Bump, who apparently had indications of alcohol symptoms from alcohol, and maybe drug use.

"It was the people that made this work," Officer James Holmes, a spokesman with the Phoenix Police Department told The Republic.

Bump's case came before a second incident Wednesday where a 24-year-old man was taken into custody and charged with trespassing early Wednesday morning after he also jumped the fence, and strutted on the airfield at Newark Liberty International Airport after an arrangement reportedly did not pan out as expected The New York Post reported.

Siyah Bryant was taken in after trying to find gas for the car he and another passenger were in.