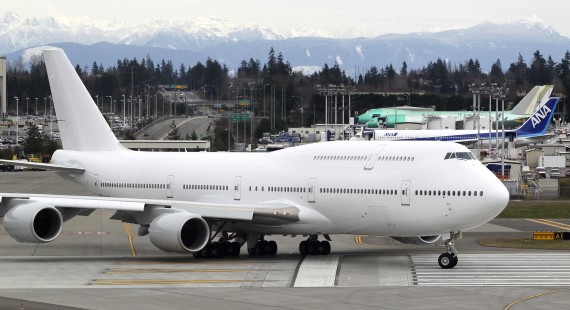 Cathay Pacific has ordered more airplanes from Boeing like the 747-8.(Photo : Reuters)

"We are very pleased to confirm this latest aircraft purchase from The Boeing Company," John Slosar, CEO at Cathay Pacific said in a statement. "Both the 777-300ER and the 747-8 Freighter offer a highly efficient solution on Cathay Pacific's ultra-long-haul routes, combining superb operating economics with a significant reduction in emissions. These two aircraft types will form the backbone of our long-haul passenger and freighter fleets through to the end of the decade."

The 747-8 also has an additional 16 percent in cargo space from earnings, similar to the 747-400 which has the same price for trips, and less for how far it goes, and how much it carries the press release reported.

"Cathay Pacific is a longstanding customer and operator of Boeing's products and services," Ray Conner president and CEO at Boeing said in a statement. "We value our partnership with Cathay Pacific and are grateful for their enduring confidence in Boeing and our wide-body airplanes."

Boeing expects to send out airplanes to those who ordered them between 2021, and 2024.

Boeing and The International Association of Machinists union group is still deciding on a contract, and where to build the aircraft.

Its current site in Puget Sound, Washington  is one of the locations being discussed among 22 others including  Charleston, S.C., Huntsville, Ala., Long Beach, Calif., Philadelphia and St. Louis Bloomberg Businessweek reported.

The Machinists originally did not agree to the terms of a deal, which would have made their healthcare more expensive, eliminated their pension, and given Boeing a 20 year timeframe to construct the transporter.

The union group then did not agree to a revised because they felt it was the same as the first one except for $5,000 in extra income.