Kraft's Velveeta On Cheesepocalypse: 'Stick With Us in the Coming Weeks, Because We Want to Make it Up to You' 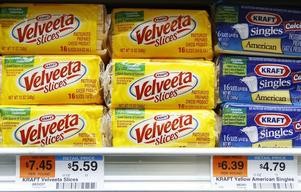 Velveeta is working on a way to rectify its latest cheese shortage the company said in a statement on its tumblr blog Friday.

"While the current Cheesepocalypse is a difficult time for our great nation, we are incredibly humbled and appreciative of the outpouring of love and support for the Liquid Gold of Velveeta," the company said in a statement on the post.

Grocery stores on the east coast, such as one in Brooklyn had said they were in short supply, and would not receive any more until February Advertising Age reported Monday.

"As you have likely seen or heard by now on social networks and major media outlets, there is currently limited availability of some Velveeta products in many stores nationwide," Velveeta said in the statement. "We want you to hear directly from us that it's true-we are experiencing a temporary scarcity of our nation's most precious commodity: Liquid Gold. But please know that we are working tirelessly to get more Velveeta on store shelves as soon as possible and that this was in no way a "publicity stunt," the statement said. "We always want Velveeta where it belongs in your hands, in your homes and in your stomachs," the statement said. "Stick with us in the coming weeks, because we want to make it up to you-and we will. On behalf of our entire team, thank you for your support, for your understanding and-most importantly-for your love of Velveeta. We love you," the statement said.

According to MarketWatch Kraft's Velveeta eight-ounce product was not available From Oct.10 to Dec. 28. Kraft then cut back Velveeta's supply until Saturday MarketWatch reported.