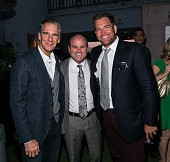 Tonight's episode will see Bishop (Emily Wickersham) having to deal with her husband, Jack (Jamie Bamber) once again.

After Malloy was discovered to be cheating on Bishop, the latter decided to leave and stay with her mom.

But now, she will be forced to come back home and finally face the truth about her relationship as Malloy tries his best to win the trust and love of his wife back.

Meanwhile, fans will get to learn more about Mallard (David McCallum) in the upcoming episodes of "NCIS."

Tonight's episode will also see a flashback of Ducky's life. It will show more details about the supposed death of his younger brother and how he is led to believe otherwise.

"Ducky is attacked by a man claiming to have information about his half-brother who died decades ago. While the team search for the perpetrator, Ducky recalls the final days he had with his younger sibling. Also: Bishop and Jake discuss the future of their relationship."

For more CBS shows, there is a live stream of the channel which can be accessed Fox Now or  here or here  (different regions might access different sites), and through that, fans can watch "NCIS" season 13 episode 11.