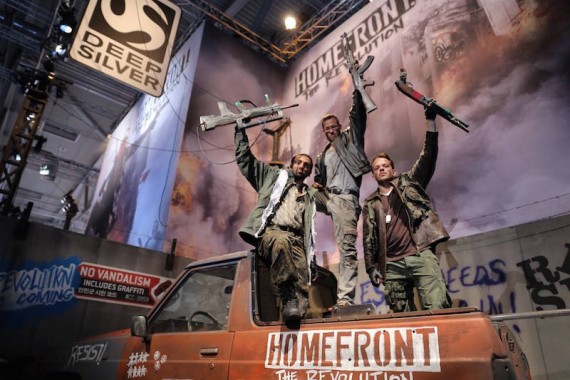 With the initial release date set next year, fans are becoming more and more interested on what to expect of Deep Silver's "Homefront: The Revolution" gameplay.

While waiting for the official announcement of the release date, the game's producation house has gamely shared details on the highly anticipated game.

Senior narrative designer CJ Kershner has reportedly shared his thoughts on "Homefront: The Revolution" gameplay and how it is being compared to other shooting games, Examiner reported.

"Unlike other shooters, you have 360 degrees of movement," Kershner revealed to MCV. "Plus, you can go up and down. We try to get the player to think about how they can use the environment to their advantage. Also, there's not a lot of running around in the open - we're targeting a different kind of experience. In our case, running around is the best way to get killed. It's about knowing when to attack but also knowing when to retreat."

While things are looking exciting coming from his statement, he further teased more interesting details about the game's gameplay and its setting as well.

"One of the other things that makes 'Homefront: The Revolution' markedly different from other open-world games is that the city is divided up into distinctive zones," he said. "The red ones are more focused on guerrilla combat. But in the yellow zones, you see how civilians have been living under the occupation area. You can't walk around with a gun, so you have to figure out how to navigate a crowded street without being seen by the police."

"The green zones are the seat of the North Korean administration. They're the landmarks of Philadelphia, like Independence Hall, and they're very heavily controlled from a security standpoint. Those are where we have our large set-piece missions: spectacular assaults on government positions and things like that."

Below is the official description to "Homefront: The Revolution" game from Deep Silver:

'"Homefront: The Revolution' is an open-world first person shooter where you must lead the Resistance movement in guerrilla warfare against a superior military force.

A living, breathing, open world responds to your actions - you and your Resistance Cell can inspire a rebellion on the streets and turn Occupation into Revolution, as oppressed civilians take up the fight.

But your enemy has the advantage - superior technology, firepower, heavy armour and air support. You must learn the art of guerrilla warfare  - ambush, sabotage, infiltration, deception - and fight a running battle through the war-ravaged suburbs of Philadelphia.

And the single player campaign is just the start - in Co-Op you and your friends can form your own Resistance Cell and become renowned as Heroes of the Revolution."

"Homefront: The Revolution" is going to be made available by Deep Silver in 2016 for PS4, Xbox One and PC.