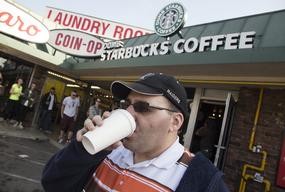 The Dumb Starbucks location in Los Angeles was shut down for not having a permit to function. Its owner Nathan Fielder also announced he was the man behind the joke.(Photo : Reuters)

Nathan Fielder is the man behind the makeshift Dumb Starbucks location in Los Angeles.

Fielder star of the Comedy Central skit-based show "Nathan For You" infamous for its antics on small businesses unlocked the doors to the store Friday with word going around about the new location Saturday and Sunday The Los Angeles Times reported.

"There have been lines around the block and very few small businesses get that from the start," Fielder told The Times. Some people reportedly waited for their chance to see the stores interior for hours on end.

"We've been wondering what this was about for four days," Rebecca Metz, a Los Angeles resident told USA Today. "I wish it was a political statement or a kooky artist, but it's a really smart marketing stunt," Metz told USA Today.

Customers saw coffee cups in three measurements that had stickers with the Dumb Starbucks name, and the original Starbucks emblem.

Customers could get the Dumb Frappuccino, and Dumb Blond Roast in cups from Dumb Tall to Dumb Venti Fox News reported.

The coffee shop also had Vons Pastries still packaged up before the Los Angeles Health Department ordered it closed because the store was open without a permit The Times reported. A sign was then put up after Fielder declared he was the man behind the store.

The store was located in Los Angeles's Los Feliz section, in a small strip mall with a sign that read Dumb Starbucks.

"While we appreciate the humor, they cannot use our name, which is a protected trademark," Laurel Harper, a spokeswoman for Starbucks Corp. told Fox News.

Fielder felt he could use the Starbucks material since it was for joking purposes, and not real The Times reported.

Fielder was even going to open up a second fake Starbuck's location in Brooklyn, N.Y.