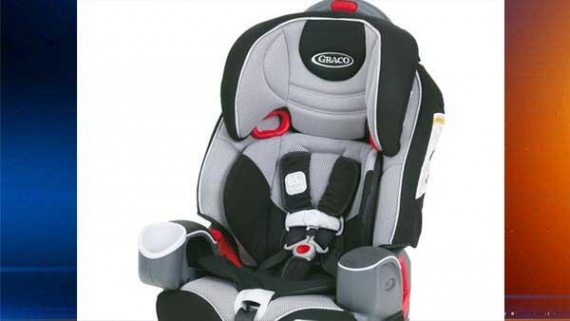 Graco is recalling 3.7 million of its car seats because users can have a tough time taking a child out of the safety chair according to information from The National Highway Traffic Safety Administration.

The lock may not come apart easily when a consumer presses the required button the NHSTA reported.

This is especially crucial should consumers be in an accident, fire, or another instance the recall information reported.

Seats sold since July do not have the issue according to the NHSTA, CNN reported.

"This does not, in any way, affect the performance of the car seat or the effectiveness of the buckle to restrain a child," a Graco spokeswoman told myhighplains.com.

"Food and dried liquids can make some harness buckles progressively more difficult to open over time or become stuck in the latched position," Graco told television station WTVY in a statement.

The affected seats were made between 2009 to 2013 according to the NHSTA.

The products include the Coxy Cline, Comfort Sport, Classic Ride 50, My Ride 65, My Ride with Safety Surround, My Ride 70, Size 4 Me 70, Smartseat, Nautilus, Nautilus Elite, and the Argos 70.

Consumers with affected seats can call the NHSTA's vehicle safety hotline at 1-888-327-4236. They can also visit www.safercar.gov.

There is no word on how the problem will be solved, or when consumers with affected products will be informed.

Graco is aware of the problem, and continues to assist consumers with affected seats CNN reported.

"This is not a new issue for us," Ashley Mowrey, a spokeswoman at Graco told CNN. "We've been working to help consumers for some time now," Mowrey told CNN.

The NHSTA plans to continue looking into the issue.

"NHTSA's investigation will remain open pending its evaluation of the Graco recall and until the agency's consideration of the review of the 7 remaining sea models is completed," the department said in a statement.