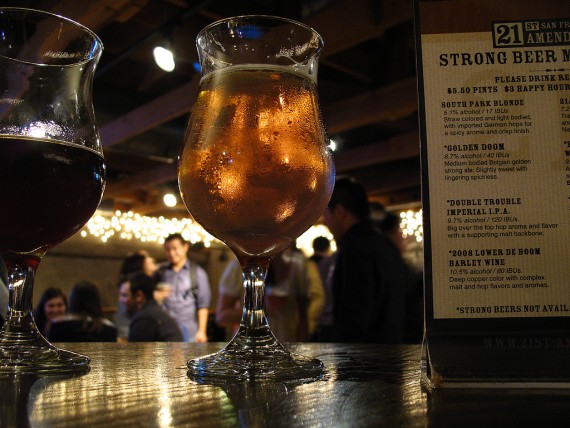 New York City Beer Week, an annual celebration of beer, begins today, Feb. 21 and will be held until March 2 in Brooklyn. The celebrations will include tastings, tap takeovers, and beer-inspired dinners.(Photo : fotogail)

New York City Beer Week, an annual celebration of beer, begins today, Feb. 21 and will be held until March 2 in Brooklyn.

The celebrations will include tastings, tap takeovers, and beer-included dinners, according to Village Voice.

The event's co-founder Jimmy Carbone said Brooklyn is the best place to hold Beer Week because of the success of Brooklyn's brewing industry, Brooklyn Daily reported. Over four breweries opened in Brooklyn in the past year, and more are set to open soon.

"There have not been this many new Brooklyn breweries since Prohibition," Carbone said. "I think the vibe is right, since there are so many that are opening."

Over 100 beer events will be taking place and will feature flavors and styles from 16 breweries based in NYC, according to The Daily News. Beers will be included from breweries such as Rockaway Brewing in Queens and Gun Hill Brewing in the Bronx.

President of the NYC Brewers Guild Jeremy Cowan said Beer Week will benefit from the inclusion of breweries in all five boroughs.

"Craft beer is the poster child for local products," Cowan said. "Why not have all these fantastic beers that are made down the street from your house?"

Beer Week begins with the Opening Bash in Grand Central Terminal at 7 p.m., where those who attend can sample over 30 rare beers, Village Voice reported. Beer Week will also be holding the Brooklyn Brewery Mash Bash with Dinner Lab, the Second Annual Women in Beer Event in Taproom 307, Happy Hour for Beer Union's Book Release, and many other events throughout the 10-day celebration.

Kelly Taylor, VP & Treasurer of the NYC Brewers Guild said he is excited for many of the events to take place in Beer Week, according to Metro. Taylor is the owner KelSo Beer Company, which will be holding its second annual dinner on Feb. 25.

"We'll be featuring our Cabernet Barrel Aged Rauchbier and some Flemish Red," Taylor said. "It's a five-course craft beer dinner at one of our favorite restaurants in Brooklyn."