McDonald’s Breakfast Menu Hours Change to Later in the Day 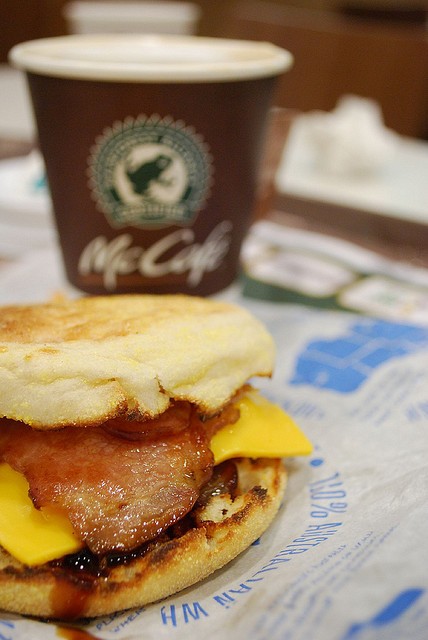 McDonald’s has announced it is looking into extending its breakfast hours later in the day. McDonald’s breakfast hours currently run until 10:30 a.m., and feature fan favorites such as the Sausage Biscuit and the Egg McMuffin.(Photo : avlxyz)

McDonald's has announced it is looking into extending its breakfast hours later in the day.

McDonald's breakfast hours currently run until 10:30 a.m., and feature fan favorites such as the Sausage Biscuit and the Egg McMuffin, according to Associated Press. Extending hours for these items to be offered in the breakfast and lunch menu hasn't occurred yet due it being declared impossible because of the tight spaces of the restaurants.

Other complications can prevent the extension of breakfast hours. The McDonald's menu has grew by 70 percent since 2007, and the restaurant is currently experiencing the longest drive-thru waiting times in decades, Business Insider reported.

McDonald's spokeswoman Lisa McComb stated in an email that there are no tests for extending the hours, according to Businessweek. McComb said an evaluation doesn't mean McDonald's is looking to make a full breakfast menu available, or that breakfast hours would be extended for the full week.

"We know, for example, that breakfast on the weekend cut off at 10:30 doesn't go very well," Stratton said.

Stratton did not provide how McDonald's would change kitchen operations to make breakfast an option to have later in the day, according to Assocaited Press.

McDonald's has been thinking about extending breakfast hours for a long time, and is coming closer to making a decision with growing competition and decreasing sales, according to Associated Press. The restaurant offered an "After Midnight" at select locations last year, which was available from midnight to 4 a.m. and featured a small mix of breakfast and lunch items.

McDonald's must also consider the need for support from the company's network of franchisees in order to make changes, Associated Press reported. Franchisees are responsible for training employees and buy new equipment for changes, which can affect the chances customers have of being able to buy breakfast items later in the day.