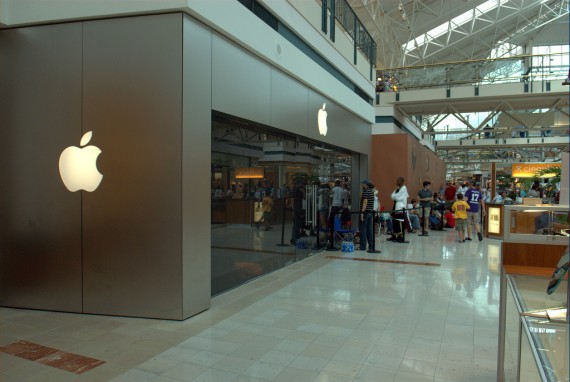 Pegatron, one of official iPhone assemblers, is reportedly setting up a unit dedicated for iPhone assembly in order to manufacture the devices in Q2. (Photo : M Glasgow)

French Website Nowhereelse has leaked images of the Apple iPhone 6, which is expected to be released sometime this year.

The images show the iPhone 6 with a 4.3 inch screen display, rather than the rumored 4.5 to 5.0 inches of display, according to IBTimes.

The image shows slimmer side bezels, and that the iPhone screen's size can be increased by removing the side bezels, Today's iPhone reported. The image is not official, but it provides more to discuss for the rumors of an edge-to-edge iPhone screen.

Another iPhone 6 rumor claims the device will have an 8MP camera with a new f/2.0 aperture, Today's iPhone reported. The aperture size would let the device take better pictures in situations involving a small amount of light. It has also been reported that the sensor size will be increased to improve image quality.

Additional rumors of the iPhone 6's features have been claimed, although none of them have been confirmed, IBTimes reported. These features include Retina+ IGZO technology and a new form factor with no home button, both of which would be included in the iPhone 6 with larger screen display.

The iPhone 6 has also been reported to be able to respond to Fingerprint ID touch and gestures for unlocking and using the device, according to IBTimes. The gesture effects could include a wave of the hand on the display and knocking on the screen. The feature gives the user more options in hands-free decisions for card mode and Siri.

The iPhone may also feature a patent called "Computer User Interface System and Methods", according to IBTimes. Features of the patent include identifying gestures made by the user, measuring the user's location in a room and changing the user interface of the system depending on how close the user is to the device.

According to IBTimes, reports stated that the iPhone 6 will be released in the summer. However, the prototype for the iPhone showed that the device will be coming out later since the iPhone's display size and screen type are still being worked on.