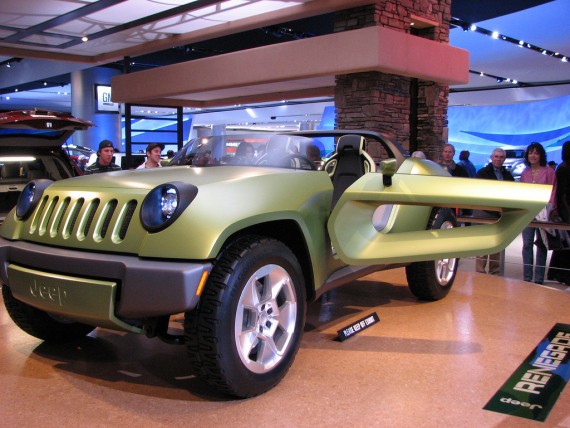 Jeep announced the global production of the new 2015 Jeep Renegade at the Geneva Motor Show this week. The Renegade will be the first model from Fiat-owned Jeep to be made for the world in an Italian factory.(Photo : Kevin.Ward)

Jeep announced the global production of the new 2015 Jeep Renegade at the Geneva Motor Show this week.

The Renegade will be the first model from Fiat-owned Jeep to be made for the world in an Italian factory, according to USA Today.

Mike Manley, Jeep brand president and CEO said the vehicle is a major step in Jeep's plan for production around the world, Forbes reported.

"The all-new 2015 Jeep Renegade expands the brand's product portfolio and targets the rapidly expanding small SUV segment around the globe with benchmark levels of efficiency and driving dynamics, while at the same time delivering best-in-class 4x4 capability that customers expect from Jeep," Manley said. "Renegade symbolizes the brand's renowned American design, ingenuity and innovation, marking the Jeep brand's first entry into the small SUV segment in more than 100 markets around the globe."

The Renegade is set to go on sale later this year, according to USA Today. The vehicle will feature a nine-speed automatic transmission for improved fuel economy, along with a new roofless MySky feature.

Additional features of the vehicle include 16 different powertrain combinations, and an adjustable four-wheel-drive system, which has auto, mud, show and sand modes, Forbes reported. The Trailhawk model of the Renegade features an exclusive rock mode.

The Renegade features technology that is usually featured in bigger, more expensive vehicles, according to Forbes. These features include over 70 safety features and a large touchscreen. The Renegade will also offer Chrysler's UConnect Access System, which can read text messages to the driver, call for roadside assistance and notify 9-1-1 for emergencies.

Building of the Renegade will take place at Fiat's plant in Melfi, Italy. The vehicle will be exported to Europe and the U.S. before moving, in a slightly different form, to Brazil in 2015, the Wall Street Journal reported. Jeep is also looking to begin production in China a year later.

"In South America, this thing is going to be dynamite," Bragman said.