Scientists Propose Use of Infrared Radiation as Renewable Energy 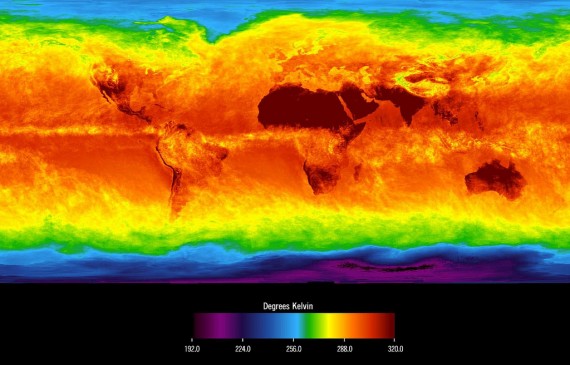 Physicists at Harvard University have proposed the gathering of energy from Earth’s Infrared emissions and using it as a new renewable resource. The researchers said that recent advances in technology could give them the chance to convert the radiation into direct-current (DC) power.(Photo : Atmospheric Infrared Sounder)

Physicists at Harvard University have proposed the gathering of energy from Earth's infrared emissions and using it as a new renewable resource.

Being heated by the sun keeps the Earth extremely warm compared to outer space. The researchers said that recent advances in technology could give them the chance to convert the radiation into direct-current (DC) power, according to Harvard News.

"It's not at all obvious, at first, how you would generate DC power by emitting infrared light in free space toward the cold," Dr. Capasso said. "To generate power by emitting, not by absorbing light, that's weird. It makes sense physically once you think about it, but it's highly counterintuitive. We're talking about the use of physics at the nanoscale for a completely new application."

There were two methods proposed for harvesting infrared radiation, one of which involves putting a hot plate, which would be at the temperature of the Earth, beneath a cooler plate. The cooler plate would be made from emissive material that gets colder by radiating heat to the sky. The researchers said that the difference in heat could generate several watts per square meter, both during the day and at night, Harvard News reported.

The second method involves creating tiny electric circuits with components called diodes and antennas. The antennas emit the Earth's infrared radiation, while the diodes conduct the antenna's electric current in one direction. The researchers said they must keep the diode warmer than the antenna in order to create voltage. They also said that covering a flat device with millions of these circuits pointed at the sky could generate a huge amount of electricity with the Earth's radiation as the source, according to the Huffington Post.

Study co-author Steven J. Byrnes stated his confidence in the development of infrared radiation as a new energy source, the Huffington Post reported.

"People have been working on infrared diodes for at least 50 years without much progress," Byrnes said. "But recent advances such as nanofabrication are essential to making them better, more scalable, and more reproducible."