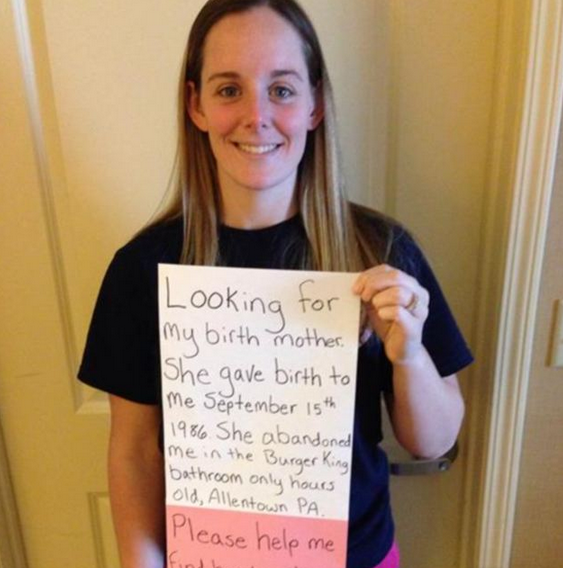 Katheryn Deprill with the sign she made while searching for her mother.(Photo : Twiiter Photo Section)

A daughter was reunited with her mother Monday after she left her in a bathroom of a Burger King in Allenton, Pa. 28 years ago according to The Associated Press.

"She is better than anything I could've ever imagined. She is so sweet and amazing. I'm so happy," Deprill told the AP.

"It looked like I was looking in a mirror," Deprill told the AP.

"I got the hug that I had wanted for the last 27 years, and that broke the ice. I asked if I could have it, and she said absolutely, and just held her arms open, and the rest is history."

According to Today.com, Deprill was discovered Sept. 15, 1986 dressed in a red sweater in the bathroom of the Burger King located in Lehigh Valley, Pa.

Deprill started her own search to see if she could find her biological mother .

"Looking for my birth mother. ... She abandoned me in the Burger King bathroom only hours old, Allentown PA. Please help me find her by sharing my post," said on a sign in a photo posted on her Facebook page March 2.

Deprill's mother then surfaced when she arranged to meet up with her via a lawyer after the story hit the national news circuit, and thirty-thousand Facebook users publicized the photo throughout the globe.

"It was one of the most emotional, joyful, dramatic, exciting things I've ever seen," John Waldron the attorney for the case told the AP.

"If you sat there for five minutes and heard them and watched them and observed them and looked at them, you would know," Waldron told the AP.

Deprill is married with three children, and currently works as an emergency medical technician the AP reported.

Her biological mother was reportedly raped abroad and ended up bearing a child, which she kept from her parents after she bore the baby in the bedroom of the home, and did think she could bring the baby to the hospital for proper medical care for fear of the inquiry it entailed. according to Waldron the AP reported.