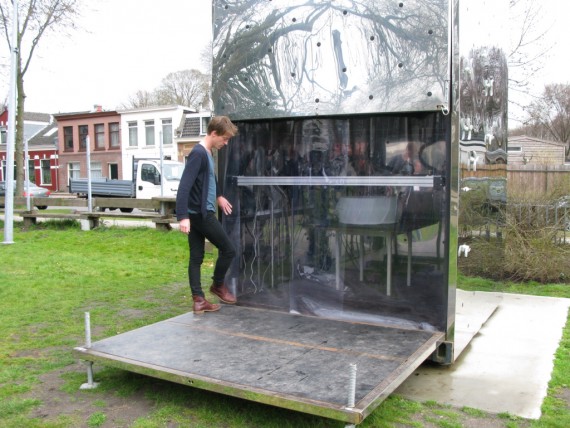 Architects in Amsterdam have begun building the first full-sized 3D-printed house. Dus Architects, the firm in charge of the house’s construction, looks at 3D-printing as the future of building houses.(Photo : Forgemind ArchiMedia)

Dus Architects, the firm in charge of the house's construction, looks at 3D-printing as the future of building houses, according to The Guardian.

"The building industry is one of the most polluting and inefficient industries out there," said Hedwig Heinsman of Dus. "With 3D-printing, there is zero waste, reducing transportation costs, and everything can be melted down and recycled. This could revolutionize how we make our cities."

The house is set to be a 13-room canal house with a plastic façade instead of being made of hand-made bricks, The Guardian reported. After working on the project for three weeks, the architects have built a 3m-high sample corner of the house, which was printed as a single piece that weighs 180kg.

The project is called the 3D Print Canal House, and is seen by Dus Architects as an improvement to current ways in which buildings are made, The Verge reported. Designers from the company say that by printing blocks instead of using conventional materials, they can eliminate waste and bring down costs since the plastic can be made with recyclable materials. Non-architects can remix single rooms and design elements. As a result, people have the chance to design their ideal home instead of hiring a contractor.

KamerMaker, or Room Builder, is the scaled-up version of a 3D-printer created by Dutch firm Ultimaker, and will make the pieces for the house, The Guardian reported.

"We're still perfecting the technology," Heinsman said. The printer currently uses an industrial adhesive, made from 75 percent plant oil and reinforced with microfibers. The device has also been tested with translucent plastic and a wood fiber mix.

"We will continue to test over the next three years, as the technology evolves," Heinsman said. "With a second nozzle, you can print multiple materials simultaneously, with structure and insulation side by side."

The site has been visited by over 2,000 people, including contractors and architecture students. President Barack Obama has also visited the site.

"This is only the beginning, but there could be endless possibilities from printing functional solutions locally in slums and disaster area, to high-end hotel rooms that are individually customized and printed in marble dust," Heinsman said.